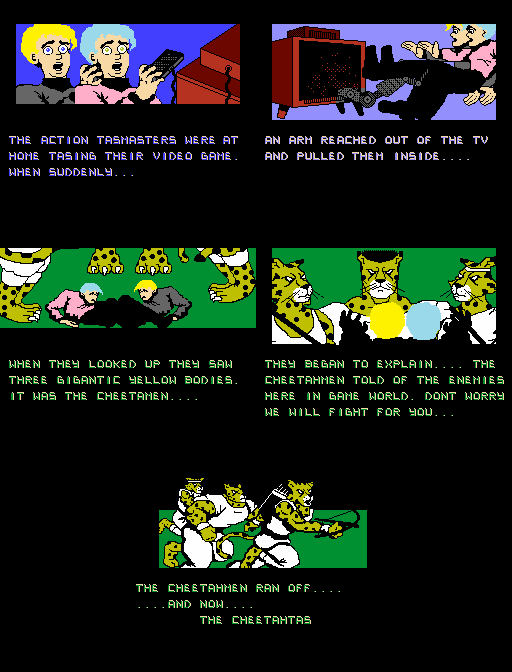 This is an improvement of 2690 frames over the previous movie, time saves come from better optimization of some levels, as well as using a warp on the 2nd to last level to spawn the final boss in a glitchy room.

this is the only top down level in the entire game, and does not make a return. We go into a waterfall to access a warp to the next stage.

by using a double jump glitch, which involves attacking then immediately jumping, we can wrap around the top of the screen to fall faster.

It really doesn't matter where your Cheetahmen's position is as long as the screen is constantly moving.
On the Rhino boss we manage to do a quick kill that's faster by half a cycle compared to the previous movie

In this stage we make use of a warp that brings us to a grey glitch vill. I tried to die in this stage as RTA is able to warp to the next level this way, but it wasn't working for me. HOWEVER, I realized that you can spawn the final boss in this room, so we do that.
The boss will spawn based on some RNG value, it's by pure luck that we were able to get it to spawn right away.

While the biggest improvement is spawning the final boss in the Hell Dimension and skipping an entire stage in the process, the other two boss fights are also improved through better understanding of how fighting a boss works. Bosses have 148 HP and die when they reach 128, like normal things that make sense. For the two melee characters, they do damage every non-lag frame of their attack as long as the hitboxes are connected. You can do a maximum of 9 damage per attack if positioning lines up properly, which given this game you can pretty safely say that no, it usually doesn't. The rhino boss is real nasty with positioning issues. The charge attack starts at an inopportune time and is ever so slightly too fast to allow for a 9 damage hit without dying. The best we could get was 7 damage, we need 8 on the last hit, so we had to back up and semi-RTA strat that guy.
There's a possibility that we could get the quicker kill, which would save about a second, but there is the big issue with the final boss. Namely, it's an RNG-based spawn, like normal things that make sense, and it's a frame delay thing. We got literally the best possible result for that spawn, 0 delay needed and a beautiful pattern for the fight itself. The Glitch World Hell Place is... Really, really weird and inconsistent. Sometimes there are invisible platforms, sometimes there aren't. You can't stand on an invisible platform and fire, because you will immediately fall through, like normal things that make sense, so we do have to cut our firing barrages short so we can move back to where we think an invisible platform is and jump off of it. This is in fact a slower fight than the published run, but that's because the published run actually has a stage with actual platforms and is able to just stay in the boss's face and rapidfire it to death near instantly. It's a price of a second or two for the huge 40-ish second improvement of skipping an entire stage.
Anyway, video games are art. One love, y'all.
Memory: Judging
Memory: Optimization was good.
Feedback was rather good. The glitches were fun and the pace wasn't slow even if the game is a little simple. The current run on the site has fairly poor ratings and this run isn't that much different from it minus the final boss warp. However, the feedback here is quite positive so this can go to moons for now.
Accepting to Moons as an improvement to [1584]NES Action 52: The Cheetahmen by Swordless Link in 03:56.06.
fsvgm777:
THE TASVIDEOS PUBLISHER WAS AT HOME ENCODING A TAS. WHEN SUDDENLY....
AN ARM REACHED OUT OF THE TV AND PULLED HER INSIDE....
WHEN SHE LOOKED UP SHE SAW THREE GIGANTIC YELLOW BODIES. IT WAS THE CHEETAMEN....
THEY BEGAN TO EXPLAIN.... THE CHEETAHMEN TOLD OF THE ENEMIES HERE IN GAME WORLD. DONT WORRY WE WILL FIGHT FOR YOU...
THE CHEETAHMEN RAN OFF...
....AND NOW....
THE CHEETAHTAS WILL BE PROCESSED
Last Edited by fsvgm777 on 7/13/2021 4:39:45 PM
Page History Latest diff List Referrers