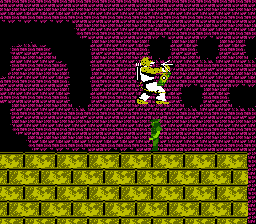 Watch Download (.bk2)
Author notes Discuss
6.35 / 10 Votes: 4.5
Even the worst video games ever made can make for a good TAS.
This movie speedily plays through "The Cheetahmen", game #52 of a compilation of horrid games called Action 52. While the game is pretty horrible in general, it has a rather catchy BGM.
EZGames69 and Samsara improve the previous movie by 44.76 seconds, thanks to better optimisation and using a warp in the 5th level to spawn the last boss early in a glitched up level.
There are also two published runs of the unreleased sequel, Cheetahmen II. One plays through all the levels, whilst the other starts from level 5 from power-on, due to abusing the fact that some games do not initialize their states before reading them.
Published on 7/16/2021
Obsoletes:
NES Action 52: The Cheetahmen by Swordless Link in 03:56.06

Emulator Version:
BizHawk 2.6.2
Webmasters, please don't link directly to the files. Link to this page or the front page instead.
Republication of movies from this site is only allowed under the following conditions:
Do not label them with speculations. If unsure, ask the site staff for details.