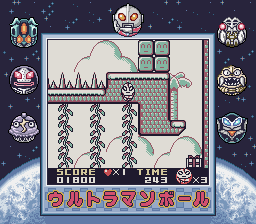 Watch
Ultraman Ball is a platform game featuring the famous Japanese television character Ultraman. However, the game has little to nothing to do with Ultraman, as oddly enough, his power in this game is to transform into a ball and bounce around a lot. Some say this game is based on the abandoned NES project, Armadillo 2, and in fact the game is very similar to Armadillo.
Serena improves the previous TAS by about 9 seconds, if emulation differences are ignored. This is thanks to better optimization and newly discovered wall glitches.
The baseline tab shows the default movie beating the game as fast as possible without any special conditions.