Super Mario Bros. Special: 35th Anniversary Edition (v1.3) is an SMB hack by Frantik.
"Unlike most 2D Mario games, Super Mario Bros. Special didn't have any warps, and this was faithfully kept in this romhack. This means that every level has to be completed." A quote from the movie page of the newly published TAS of this hack.
But that's not true. In fact, not every level has to be completed, because you can freely choose a starting world in the title screen.

(Link to video)
Download HD encode (5.91 MB, MKV)
The goal of my TAS is clear: fastest completion. The real any% run of this hack should start at World 8.
This is not cheating, because it's simply allowed by the hack creator (Frantik). He stated it in "Readme.txt": "There are two special features accessible from the main title screen: Press B to select the starting world..."
After saving the princess, you'll get the very same ending text & credits. I see no reason not to use it in an any% TAS.
Other than that, it's just an ordinary SMB hack TAS.
Frankly, it's not my favourite hack, and far from my favourite TAS. But to me, if this hack is allowed to be published on this site, it deserves a real any% run. 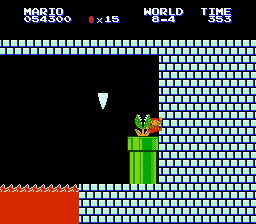