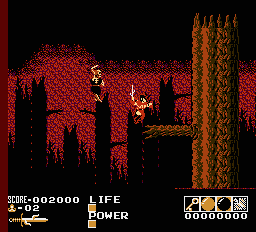 Watch Download (.fcm)
Author notes Discuss
5.7 / 10 Votes: 11
Demon Sword (1989) is the kind of a game that Legend of Kage should have been.
It features a hero named Victar, who can easily jump on a tall tree (and sometimes over it, since he can't jump much lower) and is willing to defeat the evil demon that conquered the world. The key to defeating him is Victar's sword, which is conveniently broken into pieces that must be collected over the span of the game.
So watch his sword getting bigger and more powerful every few minutes, until its wielder decides it's big enough to save the world.
This is a yet another large improvement for this game. This time 61 seconds were saved over the previous movie by Yunshui.
Published on 9/27/2007
Obsoletes:
NES Demon Sword by Yunshui in 09:00.13