This page documents the .bk2 file format for the BizHawk Emulator. This format is a replacement to the .bkm format that was originally released with the emulator and used up to the 1.7.2 release. 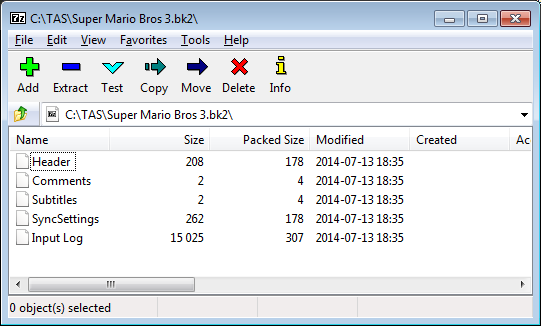 .bk2 is an archive file that contains movie data broken into various files. It is a zip format and can be opened with any unzip tool, such as 7z.

A text file in UTF-8 encoding that contains key-value pairs for various aspects of the movie such as
Note that the StartsFromSavestate is a convenience property. The existence of a CoreState object is what makes a movie savestate-anchored. Even if this property was false, that file will still be checked and loaded if it exists.

A text file in UTF-8 encoding that contains the input log of the movie. Input frames are represented by lines that begin with "|". (The frame count can be determined by counting the number of lines that start with "|".)
The first line of the input log file is a Log Key. This shows the button names, in order, that are used for this input. Currently this is only for convenience and is not read by BizHawk when loading a movie. Altering the Log Key has no effect.
All lines that start with a pipe (|) represent a frame of input. All boolean input is represented by a single character when on, and a "." when off. The actual character used matters only for readability, BizHawk will interpret any character other than "." as on.
Analog controls are represented by a 5 digit number (left padded with spaces) followed by a comma.
Pipes (|) can be present anywhere in the input log and serve as logical separators, typically to separate distinct controllers (but only by convention).
Actual buttons and orders vary per platform and controller configuration.

Simply a text file of comments by the author.

A JSON blob of all core settings required for sync. These will be automatically loaded and applied by the emulator when the movie is loaded.

If this file exists, it is a savestate-anchored movie. This state will be loaded when the movie is loaded.
Bizhawk/BK2Format last edited by YoshiRulz on 2/22/2022 2:09 AM
Page History Latest diff List referrers View Source