(Link to video)
With two days until the release of the remastered version of this game, you can prepare for it by watching this remastered TAS of the game!
MESHUGGAH's comments
Thanks to Pasky13's HUD lua script, feos' DT2 lua script and helping with DT1 and Aglar for being much more precise than me, we implemented more time savings into a proper "difficult" run (unlike any other published ones IIRC).
We traded lag frames, removed lag frames, made better jumps to fall down faster or reach places earlier and manipulated bosses to be fast and close to us as much as possible.
It was a pleasure to work with Aglar. He is a good TASer. That's all, see you until my next TAS =)
Aglar's comments
Got interested in joining after playing a little with the early parts of the game and found out that there might be more things to improve than I earlier thought. And even if it's not a big improvement timewise it still contains quite some different maneuvers throughout the run.
MESHUGGAH did a good job finding some stuff that I had overlooked earlier, which was what made me interested in trying this game again. I think we complmented each other really well with my old school and his modern way of TASing.
One new observation we made was that this game has enemy subpixel carryovers. This means that when an enemy in a certain memory location leaves the screen, its subpixels remains and are taken over by the next enemy that spawns in that memory location.
Also, this time around we learnt that each level can only be completed every other ingame frame. If lag had occured earlier in the level we could abuse this by waiting 1 frame at the laggy area to remove the lag frame and thus advence the ingame counter in order to always sure that the level is completed at a "good" frame.

Most time was saved was saved by taking the lower route under the first snake to grab the vine and grabbing one additional vine at the next vine section. The rest was saved by reducing lag and better vertical management in the room before the boss.

Better vertical subpixel management when jumping up the first rope. Some lag reduction and having the last ghost move in a better pattern. The boss was hit eartlier by making it start with a lower horizontal subpixel value.

When jumping up to the mirror you can be one pixel closer to the left wall by not hold left until you've reached the height required to go past it.

Used the same trick as in the previous level when going down the pit after the big treasure chest. The boss was manipulated to have better starting subpixels to save another frame.

Better lag reduction at the first goat, then gained more vertical speed when going down the pit to cave by jumping on a goat. The rest was saved by walking on the last iceblock in the long horizontal cave room.

Took damage on the moving platform in a different way. 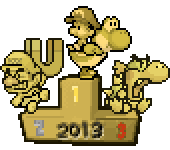 Joined: 5/27/2012
Posts: 70
Location: Wisconsin
no you should have waited til Tuesday for the ps3 remake release date rofl total yes vote here from me good job it just makes me more pumped up for the remake lol
Posted: 8/11/2013 6:55 PM
Quote

Aglar bested me a lot of times during the WIPs, he actually improved all of the levels with at least 1 frame.
PhD in TASing 🎓 speedrun enthusiast ❤🚷🔥 white hat hacker ▓ black box tester ░ censorships and rules...
Posted: 8/13/2013 4:48 AM
Quote

Not enough of the Moon theme song in the run = No vote. That and you keep picking up these things that give you $1 Mil which just makes the end-stage money counting longer. It'd be faster if you just left them behind. JK!
Posted: 8/14/2013 8:56 PM
Quote

DMTM stated that the endign of the first boss fight could be improved... Don't know what he meant and he didn't explain or show a video. Just felt like noting it here. Also: Great run you runs =)!
Posted: 8/15/2013 7:39 AM
Post subject: Movie published
Quote

youtube: https://mega.nz/#!b4cXnayb!fHwxbP0wh4ghahycw7xeXP_WTefhkEbcuwTOHckQyPc downloadables: https://archive.org/details/ducktales-tas-aglarmeshuggah
[14:15] <feos> WinDOES what DOSn't 12:33:44 PM <Mothrayas> "I got an oof with my game!" Mothrayas Today at 12:22: <Colin> thank you for supporting noble causes such as my feet MemoryTAS Today at 11:55 AM: you wouldn't know beauty if it slapped you in the face with a giant fish [Today at 4:51 PM] Mothrayas: although if you like your own tweets that's the online equivalent of sniffing your own farts and probably tells a lot about you as a person MemoryTAS Today at 7:01 PM: But I exert big staff energy honestly lol Samsara Today at 1:20 PM: wouldn't ACE in a real life TAS just stand for Actually Cease Existing