(Link to video)
Here is The Adventures of Captain Comic completed 32 frames faster than the published movie. This game kinda sucks. It also provides very little from a speedrunning perspective. Your character simply moves straight through levels while shooting enemies. Very little gets in your way to prevent you from constantly walking in a straight line, so optimizing this game isn't very impressive or particularly difficult. I did manage to find a couple of frame savings over Randil's movie, though, which are basically all related to controlling Captain Comic's velocity better. Ocasionally, trees/walls are too tall to clear without bumping into them. If you bump into the wall, you lose all your speed, and must accelerate again. Not touching these walls are the way to go, and this accounts for most of the savings. (Occasionally, the wall will be so high up that you'll have touched the ground as you land, saving no frames.)
There is some mild luck manipulation in this TAS. By jumping, enemies will spawn above you. In certain levels, this is useful, because it means they will spawn on a higher platform and won't hurt you. There is also a glitch, used at the end of the movie. By using the teleporter on the right frame, you can insert yourself in a wall, and jump up through it, allowing us to reach the final item faster. This glitch can technically be done anywhere, but it only saves time at the end of the game. Oh, and by the way, there is no speed penalty for using the teleporter, it's the exact same speed as walking.
Thanks to Randil and FODA for their previous attempts at this game... oh, and I promise I'll make another run that isn't an obsoletion soon enough :p
Samsara: Judging this Comical flop.
Samsara: Stock soundtrack, the video game! Accepting as an improvement to the published run.
feos: If feos publishes a 7-minute long NES run, you know the queue is heavily loaded.

This game is a bit boring to watch, but the improvement seems interesting! I wouldn't guess there is luck manipulation involved in this kind of game :)
My YouTube channel: https://www.youtube.com/channel/UCVoUfT49xN9TU-gDMHv57sw Projects: SMW 96 exit. SDW any%, with Amaraticando. SMA2 SMW small only Kaizo Mario World 3
Posted: 2/3/2016 11:33 AM
Quote

He/Him
Editor, Experienced Forum User
Joined: 6/23/2009
Posts: 2206
Location: Georgia, USA
Good minor improvement of a fairly ho-hum game. The music gets annoying though. The teleporter use is the most interesting part. By the way, around the 6:40 mark on the video, it seems like you jump on top of a tree but briefly lose some speed doing so. (It's the first tree you encounter in that room.) Could you teleport on top of the tree to save any time?
Used to be a frequent submissions commenter. My new computer has had some issues running emulators, so I've been here more sporadically. Still haven't gotten around to actually TASing yet... I was going to improve Kid Dracula for GB. It seems I was beaten to it, though, with a recent awesome run by Hetfield90 and StarvinStruthers. (http://tasvideos.org/2928M.html.) Thanks to goofydylan8 for running Gargoyle's Quest 2 because I mentioned the game! (http://tasvideos.org/2001M.html) Thanks to feos and MESHUGGAH for taking up runs of Duck Tales 2 because of my old signature! Thanks also to Samsara for finishing a Treasure Master run. From the submission comments:
Posted: 2/3/2016 9:52 PM
Quote

Experienced Forum User
Joined: 10/28/2013
Posts: 130
Location: United States
IIRC the teleporter has a pretty fixed algorithm. I'm not sure how it works, but suffice it to say you have no real power to choose between destinations -- within a range of starting positions, you'll always end up at the same spot. It might be worth noting that this run (and the previous one) manages to skip two full areas -- including the one where you get the Lantern, which I guess you simply don't need (I don't remember what item opens the door to the final stage). I like this game, BTW!
Posted: 2/3/2016 11:16 PM
Quote 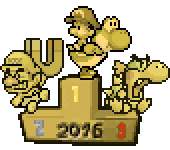 Not really sure which tree you mean. This one? I don't lose any horizontal speed from landing on that one. I ended up on the very edge of the tree, actually - Captain Comic stands on it for a frame before walking off, which looks kind of funky because it resets his y-speed and the frame he's on the tree isn't really visible. I suppose if you watched the video it would look even worse, because for some reason the quality came out kinda poor this time :S Oh? Well, now I feel bad for trashing it so much:p
Posted: 2/3/2016 11:22 PM
Quote

He/Him
Editor, Experienced Forum User
Joined: 6/23/2009
Posts: 2206
Location: Georgia, USA
Thanks for addressing my question. That's the tree I was talking about. I got the impression that you hit its right side a little bit when you jumped up to it. Since you mentioned that hitting walls makes you lose your speed, I was figuring that using the teleporter would avoid that speed loss. But it seems like there was no issue after all. Thanks again!
Used to be a frequent submissions commenter. My new computer has had some issues running emulators, so I've been here more sporadically. Still haven't gotten around to actually TASing yet... I was going to improve Kid Dracula for GB. It seems I was beaten to it, though, with a recent awesome run by Hetfield90 and StarvinStruthers. (http://tasvideos.org/2928M.html.) Thanks to goofydylan8 for running Gargoyle's Quest 2 because I mentioned the game! (http://tasvideos.org/2001M.html) Thanks to feos and MESHUGGAH for taking up runs of Duck Tales 2 because of my old signature! Thanks also to Samsara for finishing a Treasure Master run. From the submission comments:
Posted: 2/4/2016 12:38 AM
Quote

Joined: 8/29/2011
Posts: 1206
Location: Amsterdam
It's supposed to warp you exactly three squares forward (rounding to the next full square if you're in the middle of two), on top of the lowest block in that column. The key (obtained early on) opens every door. Most of the castle is dark, without the lantern you won't be able to see anything although this doesn't technically block you from passing.
Indie game developer
Posted: 2/11/2016 3:20 PM
Post subject: Movie published
Quote

Experienced Forum User
Joined: 11/12/2011
Posts: 18
Loved this game as a kid, even though it's very lame. I've never been able to finish it, but one time it glitched and I got all items but the crown. Instead of running there for the end, I tried to explore more...
Come squeeze and suck the day, come carpe diem baby
Posted: 12/6/2020 9:00 AM
Quote

According to my notes (my WIP has been lost through mistakenly formatting my hard drive), the first level of the previous TAS can be improved by 17 frames with optimal speed controlling over obstacles 3 times. This TAS doesn't improves it that much and this mistake (which I actually already written on the youtube encode 5 years earlier) edit: can be seen when jumping over tree obstacles. Approximate times of 1st lag frame at the end of stage 1 Rocky Forest Randil 3900 This TAS 3889 My lost WIP 3883 edit2: a question for the author: are you aware that your youtube channel name doesn't reflecst your username change here at tasvideos? edit3: and the submission file as well
PhD in TASing 🎓 speedrun enthusiast ❤🚷🔥 white hat hacker ▓ black box tester ░ censorships and rules...
Posted: 8/9/2021 4:04 AM
Quote

I thought that was you behind that comment! Unfortunately for this game, it is fairly dull to TAS, so I never tried making a second run... Cool to see it console-verified anyway. Yes, I have no problems with that name. It's still my real name (outside of the last initial), so people can use it if they want.The submission file, nothing I can do about that unless I learn to travel through time. :-p
Posted: 8/9/2021 6:36 AM
Quote

Okay, just wanted to let you know. Just realized I should have asked this through PM to respect your privacy, I'm glad my mistake was "okayish" now.
PhD in TASing 🎓 speedrun enthusiast ❤🚷🔥 white hat hacker ▓ black box tester ░ censorships and rules...