Dragonfire is a 1982 video game published by Imagic, developed for Atari 2600, Intellivision, Commodore 64, Apple II, ZX Spectrum, ColecoVision and more. The objective of the game is for the player to run over a castle drawbridge while avoiding fireballs and other obstacles, and then grab treasures guarded by a dragon who spits more fireballs at the player. Leave the room, rinse and repeat until lives run out. Other obstacles include a moving drawbridge, an archer firing arrows at the player, and a troll inhabiting the treasure room.

As the game progresses and more levels are beaten, the game gets incrementally harder.
The following difficulty changes are applied as the level number increases:
After this, rounds repeat with the same difficulty statistics. The game never crashes or kill-screens; after beating level 255 the level counter overflows back to 0.

Memory addresses relevant to fireball delays are as follows: (hex addresses in Main RAM unless noted otherwise)
Delays are stored in ticks; not necessarily equal to frame rate (sometimes multiple ticks are processed per frame), but close enough to be comparable.
The drawbridge bridge, if active, always has a fixed delay of 62 ticks, regardless of level. The archer, if active, has no delay; he always fires immediately after the previous arrow has touched the ground, regardless of level.
Drawbridge fireballs are stored between (system bus) addresses 8ED8-8EE2 (upper; range from 96 to 16 at level 1-11 to level 21+ respectively) and 8EE3-8EED (lower; range from 255 to 42 at level 1-11 to level 21+ respectively). The speeds of the fireballs themselves are constant and do not change at any level.
Treasure room fireball delay is stored at (system bus) address 8CD6, at value 40 decremented by the current level count, with a lower cap of 16.
Dragon fireball tracking is done by checking if the current level is 10 or greater; if true, it will aim fireballs directly at the player. Otherwise, it will call the RNG at 01E9-01EA, and randomly decide whether to aim at a random spot or directly at the player. A higher level increases the chance that the dragon will fire at the player. Intended fireball direction (velocity) is stored at 01F6 (y)/01F7 (x).
Treasure room goblins and arrows, besides their activation, do not have any level-related changes.

Following above difficulty notes, this movie plays from level 0 through to level 21.
The bridge sections have little variety in them; duck under first fireball, run a few frames and jump over the second, run over the drawbridge (regardless of whether it's actually opened or not; it's pretty buggy), and onto the next area. There are only a few caveats; one, if an archer is present, he must be luck-manipulated not to shoot an arrow to the left side (this would block player progress). Second, in later levels, the second upper fireball spawns soon enough that the player cannot reach the exit before it appears, so he needs to duck a second time.
The treasure room areas are more interesting. Treasure positions are completely randomized. The RNG for this only changes once every approx. 5 frames (depending on tick rates), which means that room compositions are relatively limited without spending excess time on luck manipulation. This means that "perfect" room compositions are effectively impossible to manipulate, so I just have to manipulate the best layout that can be gotten quickly enough, making every room quite unique. Besides getting a favorable treasure layout, collecting each treasure while getting past the dragon fireballs, arrows, and sometimes the troll also makes routing each room interesting. There are a lot of different possibilities in every room, so lots of testing different room layouts and routing was required.
Often times, I can be seen wasting some time in the bridge sections; this is for luck manipulation for the treasure rooms.

There's a small corner boost at the start of a treasury room; pressing up+left from the starting position will cause the player character to zip to the left by about one character length. This is not always beneficial, however; if the first target it downward instead of leftward, going for this would lose time instead. 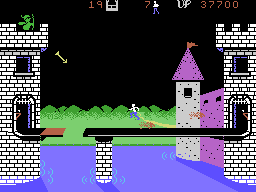 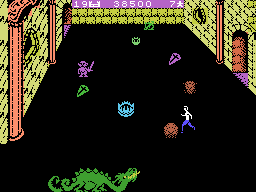 Thanks for watching!
ThunderAxe31: Judging.
ThunderAxe31: Everything seems to indicate that level 21 is the last one available. After beating it, the game proposes the very same level settings endlessly. Even the dragon's colour stops changing.
The audience reception was borderline, probably because the movie resulted a bit repetitive. However, I must note that this game is notable for its extreme difficulty, so the run results in a very clear example of tool-assisted gameplay, which is exactly the sort of material we want to highlight. Accepting for Moons.
feos: Pub.

Voted yes for you having the balls to TAS it. I abandoned this game because of the treasure layout not manipulatable enough. The Intellivision port is a bit worse than this one. edit: and good job Mothrayas :)
PhD in TASing 🎓 obsoletes TASes ⏱️ guardian of the vault 🔥 uses black magic 🧙
Posted: 4/30/2018 11:50 AM
Quote

Nice work on this one, Moth. The fact that you can walk on thin air on the bridges is pretty amusing. As for the rest of the game though, it's too repetitive for my tastes. Meh vote.
[14:15] <feos> WinDOES what DOSn't 12:33:44 PM <Mothrayas> "I got an oof with my game!" Mothrayas Today at 12:22: <Colin> thank you for supporting noble causes such as my feet MemoryTAS Today at 11:55 AM: you wouldn't know beauty if it slapped you in the face with a giant fish [Today at 4:51 PM] Mothrayas: although if you like your own tweets that's the online equivalent of sniffing your own farts and probably tells a lot about you as a person MemoryTAS Today at 7:01 PM: But I exert big staff energy honestly lol Samsara Today at 1:20 PM: wouldn't ACE in a real life TAS just stand for Actually Cease Existing
Posted: 4/30/2018 8:46 PM
Quote

Joined: 10/27/2004
Posts: 1968
Location: Making an escape
I wish to emphasize with the viewing audience the speed in which this game runs. As you can see, the game is lightning fast. There is almost no time for a human being to react to anything. I remember the first time I played this, it took me over an hour just to get past the first screen, only to die again half a second into the second screen. It disgusts me to think that the developers intended the player to go for twenty friggin screens.
A hundred years from now, they will gaze upon my work and marvel at my skills but never know my name. And that will be good enough for me.
Posted: 5/1/2018 2:03 AM
Quote

That was fun. Yes vote, though I have a question: Do you have to get all the treasures? If not, does this become an "all treasures" run if someone submits a run that just exits the dragon's room as soon as possible?
Posted: 5/1/2018 6:03 AM
Quote

You have to get all the treasures, otherwise you can't leave the room.
http://www.youtube.com/Noxxa (formerly known as Mothrayas) <dwangoAC> This is a TAS (...). Not suitable for all audiences. May cause undesirable side-effects. May contain emulator abuse. Emulator may be abusive. This product contains glitches known to the state of California to cause egg defects. <Masterjun> I'm just a guy arranging bits in a sequence which could potentially amuse other people looking at these bits <adelikat> In Oregon Trail, I sacrificed my own family to save time. In Star trek, I killed helpless comrades in escape pods to save time. Here, I kill my allies to save time. I think I need help.
Posted: 5/1/2018 2:10 PM
Quote

Experienced Forum User
Joined: 4/3/2005
Posts: 575
Location: Spain
I only played the Adventure Game Studio remake, and I thought there were far more variations in rooms. Is this a limitation of the Coleco port, or were they added in the remake? The AGS game is superb, by the way.
No.
Posted: 5/7/2018 11:50 AM
Quote

I've voted Meh by mistake, should have been a Yes. It is indeed repetitive, but it's very fast-paced and action-packed. Also, it's cool to see such a hard game destroyed like this.
my personal page - my YouTube channel - my GitHub - my Discord: ThunderAxe31#1512 <Masterjun> if you look at the "NES" in a weird angle, it actually clearly says "GBA"
Posted: 5/7/2018 1:07 PM
Quote

Any
Experienced Forum User, Published Author
Joined: 6/30/2010
Posts: 1032
Location: Zurich, Switzerland
This TAS makes the game look easy, but I'm sure I could barely get past the first screen if I tried it in real time. The run is also fast paced and very short, so it gets an easy yes vote from me.
http://nerdybynerds.ch/ Current project: Gex 3 any% Paused: Gex 64 any% There are no N64 emulators. Just SM64 emulators with hacky support for all the other games.
Posted: 5/8/2018 6:59 PM
Post subject: Movie published
Quote