Welcome, this is the discussion board of TASVideos.
If you have a question, please read the Site FAQ first to see if your question has already been answered.
Be sure your posts conform to Site Rules
We also have a Discord server and an IRC channel #tasvideos at irc.libera.chat...
Vote: Did you find this movie entertaining? (Vote after watching!)
Submission Text Full Submission Page
Shovel Knight is a 2D platform game with retro style released in 2014, and inspired by mechanics from NES platform games. It initially features Shovel Knight as the playable character, but then received additional campaigns with other playable characters.

(Link to video)
The above video contains commentaries as subtitles.

Pressing attack on the ground and jumping one frame after results in a grounded slash in the air. It is very useful to attack enemies in the air without triggering a dashslash (which is much longer). Combined with the fast fall, we have enough time to land before the slash animation ends. Hop slash duration is one frame longer than a normal slash, so it must only be used when necessary.

The actual movie reaches the game credits, but not the final screen "The End", which requires some more inputs after the credits to skip a few dialogues. I'm providing a secondary movie that reaches this final screen.
Huge thanks to the Shovel Knight discord community for their feedback, advices and enthusiasm!
Suggested screenshot: 108745
feos: Judging...
feos: Just like #6101: keylie's Linux Shovel Knight "Plague of Shadows" in 35:23.97, accepting to Moons. The secondary file has been provided, and it will be used for encoding, while the original movie without a few extra key presses will be published.
fsvgm777: Processing.

Joined: 3/9/2004
Posts: 4588
Location: In his lab studying psychology to find new ways to torture TASers and forumers
Please include your OS details, thank you.
Warning: Opinions expressed by Nach or others in this post do not necessarily reflect the views, opinions, or position of Nach himself on the matter(s) being discussed therein.
Posted: 9/17/2018 9:59 PM
Quote

Joined: 5/28/2009
Posts: 1099
Location: Luxembourg
Just as a note: Additional input is required after the credits (to clear some additional text boxes) before "The End" shows up. The other two campaigns (Shovel of Hope and Plague of Shadows) do not have any additional text boxes after the credits, so they're fine.
Twitter account - Steam Community page Oh, I'm just a concerned observer.
Posted: 9/22/2018 2:39 PM
Quote

Joined: 1/29/2007
Posts: 191
Location: Québec, Canada
These three runs are incredibly amazing and are right up there with nitsuja's Cave Story! Congratulations and thank you for your great work!
Posted: 10/3/2018 7:17 PM
Quote

In light of this rules clarification, keylie, pease post a secondary movie file containing the extra input fsvgm777 mentioned (or tell us to update the actual submission with it if you want).
Warning: When making decisions, I try to collect as much data as possible before actually deciding. I try to abstract away and see the principles behind real world events and people's opinions. I try to generalize them and turn into something clear and reusable. I hate depending on unpredictable and having to make lottery guesses. Any problem can be solved by systems thinking and acting. If TASing is meta-play, TASVideos Movie Rules are meta-meta-play!
Posted: 10/5/2018 6:25 PM
Quote 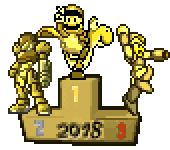 I added another movie that reached The End screen, linked at the end of the submission text.
Posted: 10/20/2018 6:05 PM
Post subject: Movie published
Quote