Put on a lizard and go for an adventure!

Lizard is a homebrew game by Brad Smith, released for NES and Windows/OSX/Linux in 2018. In this game, you literally wear lizard suits which grant you different abilities, some of which are required to reach the end of the game. It is as much exploration as it is platforming, similar to what the original Metroid was.

Hello! I'm juef and this is my third TAS. The ending is reached in 65145 frames, which is 2155 frames faster than my previous tas, and about 35 seconds faster than the current world record by Choas Legion. The in-game timer is 16:38/10. I applied the following suggestion from the game's author: The starting seed of the random number generator will not be deterministic on hardware after power-on. If you wish to record a TAS that can be played back reliably, hold LEFT + RIGHT when pressing START to begin the game, which will initialize the random seed to a consistent starting value. To verify this worked correctly, you can check the password, which will be set to 11111.
There isn't much to say about this, as the game is pretty straightforward once you know where the lizards and bosses are. Most of my time was spent on entertainment during wait times, and movement optimization. While the choices made for this movie are pretty self-explanatory in my opinion, I will list a few points of interest below, and gladly provide explanations and comments in the forums.
Please note that the rerecord count isn't exactly accurate, as I used a lot of the input from my previous TASes. In fact, the inputs for the bosses were only adapted to the RNG changes.

Most of the saved frames are a courtesy of a new route, which skips a good chunk of the Maze Zone. The rest is very similar, with a lot of copied input, a couple of frames shaved in optimizing movement, and many lost to less favorable RNG. Also, since no password is actually entered as they are earned by playing the movie and automatically displayed, this is not a Uses password TAS.

Again, should improvements come up (and I hope they will), I suspect they will mostly be from a different route and better critter/boss manipulation. I am rather confident that very few frames could be saved by movement optimization, if at all... but feel free to prove me wrong! :) There is definitely more studying to be done, notably about subpixel positions and speeds.

Thanks to Brad Smith for the great game, and Choas Legion (current WR holder), Thalonius, Smartball and Garrison for the routing efforts and the great speedruns! 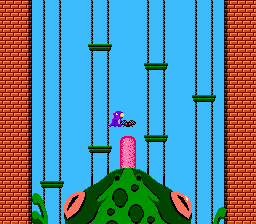 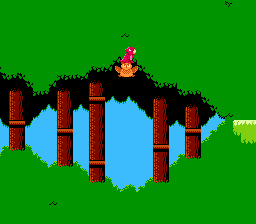 feos: Hard to spot improvements after significant route changes that happened here, but nice job anyway! This game has a hard time getting real Moons feedback, it's just doomed to remain a borderline case. Accepting as a weak Moons to obsolete [3759] NES Lizard by juef in 18:39.82.
Stovent: Processing...