FDS The Mysterious Murasame Castle in 9:55.05 by Noxxa

In Edo period Japan, alien demons have taken over the titular Murasame Castle and corrupted the castle lords of four neighboring castles. Apprentice samurai Takamaru sets out to each castle to slice ninja to pieces, scorch castle lords with fireballs, and eradicate the aliens.

The Mysterious Murasame Castle, also known as its original Japanese release title Nazo no Murasamejou, is a Famicom Disk System game developed by Nintendo EAD and published in 1986, only two months after The Legend of Zelda which it bears some similarities to. Unlike that game, however, Murasame originally only was released in Japan and did not spawn any further games or a franchise. The game has seen some re-releases over time, including being released in the West in 2014 for the 3DS Virtual Console, and Takamaru has been making cameo appearances in a few other games, including multiple Super Smash Bros. games.
Gameplay is comparable to that of The Legend of Zelda, with Takamaru being controlled from an overhead perspective, traversing through screens, slicing through enemies, and shooting projectiles. Compared to Zelda, Murasame is focused more on action than on exploring - stages are traversed in a linear progression, and while the environments contain some variety in branches, routes, and general maze-like structure (as well as tons of hidden secrets and power-ups), they too have linear progression towards the exit (or boss) as a goal. The action is also notably faster paced and more challenging.
There are five locations visited in the game - these are, in order, Aosame Castle, Akasame Castle, Ryokusame Castle, Momosame Castle, and finally Murasame Castle. Each of the first four areas is divided into a town segment and a castle segment, while Murasame only consists of a castle segment. The town segments simply require Takamaru to reach the end screen, while the castle segments end on a bossfight against the castle lord (or alien inside Murasame castle).

The story takes place in Edo period Japan. The titular Murasame Castle is taken over by a mysterious alien creature, who extends its power to four other neighboring castles. The daimyō lords of each castle are each given an evil sphere of power, and they use this power to summon armies of ninja and monsters to terrorize the nearby villages. Shōgun Tokugawa Ietsuna sends out samurai apprentice Takamaru to investigate the castles, defeat each castle lord along the way, and stop the aliens. 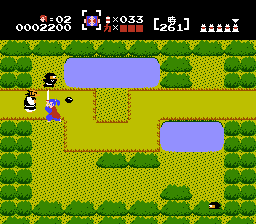 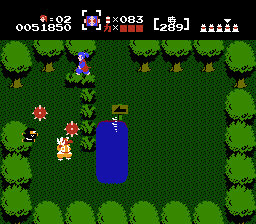 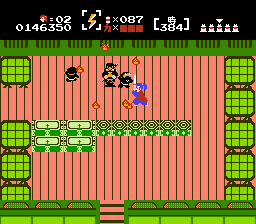 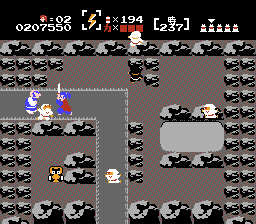 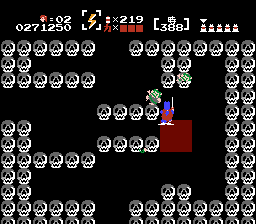 Thanks to hisatoki's 10:15 TAS from 2006 and the RTA speedrun community (WR 10:45 as of writing) for reference material.
Thanks for watching!
feos: Solid, fast-paced run, good feedback. I don't really have much to say other than Accepting to Moons.
fsvgm777: Processing.

Joined: 6/17/2006
Posts: 456
Funny how this TAS makes this very hard game look almost trivial. Great job, and Yes vote! By the way, shouldn't the 3DS version have been better since it gets rid of the loading screens? Dunno if there's a technical issue with that version or not.
The BIG List of Randomizers
Posted: 5/1/2019 7:25 AM
Quote

Based on my understanding of 3DS VC releases (there's not much information out there), it consists of the original FDS ROM with a modified/hacked FDS BIOS and emulator. There is no new separate NES/loadless ROM, to my knowledge. Unless your idea is to run the full VC package, in which case there is no accepted emulator for 3DS TASing. In any case, even if it was an option, it's quite a bit of a grey area issue (especially as TASVideos generally favors using original releases) just for a difference in loading times.
http://www.youtube.com/Noxxa (formerly known as Mothrayas) <dwangoAC> This is a TAS (...). Not suitable for all audiences. May cause undesirable side-effects. May contain emulator abuse. Emulator may be abusive. This product contains glitches known to the state of California to cause egg defects. <Masterjun> I'm just a guy arranging bits in a sequence which could potentially amuse other people looking at these bits <adelikat> In Oregon Trail, I sacrificed my own family to save time. In Star trek, I killed helpless comrades in escape pods to save time. Here, I kill my allies to save time. I think I need help.
Posted: 5/1/2019 10:03 PM
Quote

Joined: 3/9/2019
Posts: 354
Liked this Tas quite a bit. Solid superplay. The Zelda type gameplay seems well done, even if it has some similar areas. They should have released this in the west, I know I would have enjoyed it. Also...how exactly does this samurai wear the red and blue sandals at once? Is one much larger than the other? Or does he somehow attach the bottom of one to the other and go with that? Not exactly the ending theme I would have chosen for the game either ahah.
discord: CoolHandMike#0352
Posted: 5/5/2019 7:08 PM
Quote

This was a fun watch. I especially liked the clip you did at 2:16. Is that very specifically executed or can you very easily walk past it? Also it looks like they announced the characters from this game will be included in Mario Maker 2. So it’s definitely a good time to have submitted this. Yes vote.
[14:15] <feos> WinDOES what DOSn't 12:33:44 PM <Mothrayas> "I got an oof with my game!" Mothrayas Today at 12:22: <Colin> thank you for supporting noble causes such as my feet MemoryTAS Today at 11:55 AM: you wouldn't know beauty if it slapped you in the face with a giant fish [Today at 4:51 PM] Mothrayas: although if you like your own tweets that's the online equivalent of sniffing your own farts and probably tells a lot about you as a person MemoryTAS Today at 7:01 PM: But I exert big staff energy honestly lol Samsara Today at 1:20 PM: wouldn't ACE in a real life TAS just stand for Actually Cease Existing
Posted: 5/16/2019 2:01 AM
Quote

It's a 1-pixel gap. It's not that hard to pull off, though (you can bump into the border to the right of it to easily set up the correct position). RTA runs also make use of it.
http://www.youtube.com/Noxxa (formerly known as Mothrayas) <dwangoAC> This is a TAS (...). Not suitable for all audiences. May cause undesirable side-effects. May contain emulator abuse. Emulator may be abusive. This product contains glitches known to the state of California to cause egg defects. <Masterjun> I'm just a guy arranging bits in a sequence which could potentially amuse other people looking at these bits <adelikat> In Oregon Trail, I sacrificed my own family to save time. In Star trek, I killed helpless comrades in escape pods to save time. Here, I kill my allies to save time. I think I need help.
Posted: 5/19/2019 8:38 AM
Post subject: Movie published
Quote