Cool trick. Discoveries like this that are relatively simple yet no one ever thought to try always makes me wonder what other stuff is still out there to be found. Yes vote.
Posted: 12/25/2020 7:17 PM
Quote 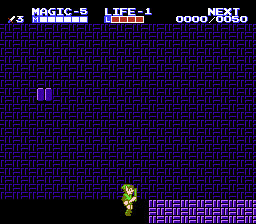 Experienced Forum User
Joined: 9/7/2019
Posts: 9
Very nice! Finding really simple glitches like this in well-known games always gives me a bit of a laugh. Massive kudos to Arc for the equally massive submission comments, and the run itself was very impressive too. Going through Parapa Palace three(?) times does result in a bit of a hit to the entertainment value of the run, but it's still very enjoyable nonetheless. I've also managed to disable the check for the candle when entering caves by changing offset 0x1D086 in the ROM from D0 to B0 and whipped up a quick encode on the modded version. https://youtu.be/fqdtUL-Wx7c
Posted: 12/28/2020 7:02 AM
Quote

In theory I could do Parapa Palace 6 times. But there are essential items in Palaces 2, 3, and 5, and it's faster to finish those palaces after getting their items rather than restart and do Palace 1.
Posted: 12/29/2020 8:18 AM
Quote

Joined: 8/19/2014
Posts: 6
Arc: No disrespect meant for my inquiry. You're contributions are very appreciated (Ghosts and Goblins are my favorite). I obviously should have tried myself to see if there are enough XP in Parapas to level-up wirhout sacrificing overall time. There's certainly enough zero XP monsters around :P To repeat, great submission :)
Posted: 12/29/2020 5:19 PM
Quote

I couldnät bring myself reading all of Arc's text but I wonder how long it took to write all of it. This tas signifies highest level of planning and tasing. Thoroughly enjoyed this run! Easy yes vote. What's next? 100% run? :P
Posted: 12/29/2020 5:57 PM
Quote

He/Him
Experienced Forum User
Joined: 8/10/2016
Posts: 83
Location: Sweden
Nominating for Submission text of 2020. I saw the movie playing in my head while reading. Amazing work. Oh, and the TAS was great, too. Best this year in my opinion. Thanks a million for making this. And I too would love to see a 100% TAS. A question: What happens if Link attempts to leave a 7th crystal? How does it affect inventory screen and Great palace entry?
Posted: 12/30/2020 2:55 AM
Quote

Thanks. It's good to hear from people who really enjoy the game and appreciate the effort that went into the movie. I'm considering a 100% movie even though it's a lot of work. That's a good question, but unfortunately the answer is uninteresting. Nothing happens if Link tries to place a 7th crystal. Link doesn't stop at the statue. Link starts with 6 crystals and has 0 left after placing all 6. The inventory doesn't go to -1 (or 255). I'm not totally sure how the Great Palace's binding-force works, but I assume that it checks that Link's crystal inventory = 0.
Posted: 12/31/2020 8:18 AM
Quote