Welcome, this is the discussion board of TASVideos.
If you have a question, please read the Site FAQ first to see if your question has already been answered.
Be sure your posts conform to Site Rules
We also have a Discord server and an IRC channel #tasvideos at irc.libera.chat...
Vote: Did you like watching this movie? (Vote after watching!)
(Link to video)
Submission Text Full Submission Page
Ford Simulator III is a vehicle simulation game from 1992 that was published by Ford Motor Company and developed by The SoftAd Group. This software lets you browse Ford's catalog and order a new car built to your specifications. Of greater interest nowadays is the Driving Simulator portion of the software, in which you pick a vehicle and drive to your family vacation in Lake Wakatonka. In order to do so, you must drive like a complete psychopath, endangering yourself and everybody on the road - but make sure you slow down when cops are around!

Why did you do this. Make it make sense

Normally you have to buy this map at a convenience store, but I've pirated it for you here: 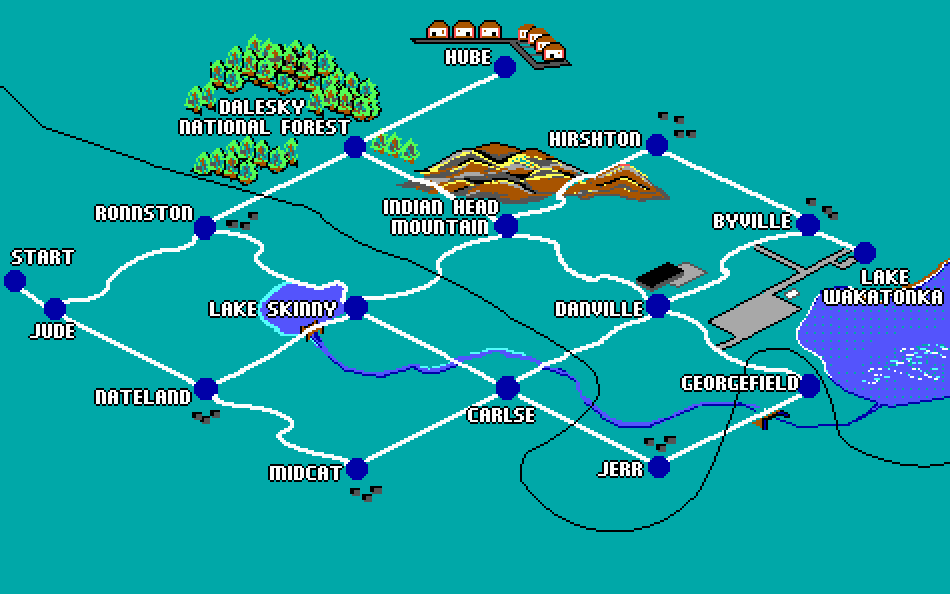 Road layouts, obstacles, and stops such as convenience stores are all fixed, but the location of vehicles on the road is random.

You have a broad choice of cars, ranging from daily drivers like a Lincoln Town Car all the way up to the Ford Mustang. I choose the Ford Taurus SHO because it has slightly better speed than the Mercury Capri XR2. This one has a manual transmission, so I must change gears myself with the spacebar.

Speeding up optimally is a matter of changing gears at the right time, which isn't too difficult to do. For some reason, the 3rd gear gives you really great acceleration, so once you top out at 105 MPH you should switch to 5th gear.
The steering system is not very precise - there are only a small number of steering wheel angles available. Steering straight or one slot to the left or right will result in normal acceleration, but any sharper angles will result in a slight slowdown. Sometimes this is necessary for sharp curves, since going offroad will result in a much more significant speed loss.
For some parts it's necessary to slow all the way down to a full stop. Veering offroad to slow down is actually much more efficient than staying on the road and braking.

The POW! bar is basically your vehicle's health. If you crash into anything, another POW! shows up on the dashboard, and once you've crashed too many times, it's game over. Oddly, if you crash into a vehicle on the road, it doesn't slow you down at all.

There are two difficulties: Beginner and Advanced. The only difference I could percieve was that in beginner mode, you get a POW! removed when you reach a town. If there are other differences, they aren't immediately obvious.

If you're going too fast, you will get pulled over by the police and lose time. They "really hate to do it", but they definitely will, even if you're going 1 MPH over the limit, which is 65 MPH. You can tell they're coming up behind you if you hear sirens, or you can see their cruisers in the oncoming lane. Thankfully, they can be easily manipulated away with a little movement variation - or, alternately, they just don't bother pulling you over. Maybe they know they can't catch up? I don't know.

The Distressed Motorist is an all-powerful being that can teleport you several miles away, but does not know how to change a spare tire. If you come across him and help him, he will send you directly to Jerr, which may seem counterproductive, but it also unlocks a shortcut from Georgefield to Lake Wakatonka.

Railroad crossings are annoying obstacles but there isn't anything you can do about them. You MUST stop for them, if you try to drive through it, it's an instant game over.

The route revolves around how soon you can get to the Distressed Motorist. It turns out the closest one is between Nateland and Midcat, so we make a straight line to there. From Jerr, you can go straight to Georgefield and then Lake Wakatonka. Using the Distressed Motorist cuts out about 2.5 road segments.
I also Googled "racing lines" and those seemed pretty good so I used that
Samsara: aw hell yeah an oregon trail run
what do you mean that's not the right ford simulator
Samsara: Going to drop this to focus on other things. Apologies for the continued delay.
Info Teddy: Yo I can do libTAS + PCem :)

Joined: 10/2/2005
Posts: 3858
A mundane premise that when TASed turns into a particular kind of comedy. Drive twice the speed limit, veer wildly across both lanes of the road, dodge the police repeatedly, get teleported by a mysterious magical man - all to get your family to a vacation in record time. Just another day in the life of Mr. TAS.
My Chiptune music, made in Famitracker: http://soundcloud.com/patashu My twitch. I stream mostly shmups & rhythm games http://twitch.tv/patashu My youtube, again shmups and rhythm games and misc stuff: http://youtube.com/user/patashu
Posted: 4/2/2022 2:21 PM
Quote

Any
Experienced Forum User
Joined: 6/30/2010
Posts: 1050
Location: Zurich, Switzerland
This is the perfect Fast and Furious TAS: You drive like a maniac, ignore basic laws of physics and in the end, it's all about family! "Yes" vote!
http://nerdybynerds.ch/ Current project: Gex 3 any% Paused: Gex 64 any% There are no N64 emulators. Just SM64 emulators with hacky support for all the other games.
Posted: 4/2/2022 7:13 PM
Quote