Welcome, this is the discussion board of TASVideos.
If you have a question, please read the Site FAQ first to see if your question has already been answered.
Be sure your posts conform to Site Rules
We also have a Discord server and an IRC channel #tasvideos at irc.libera.chat...
Vote: Did you like watching this movie? (Vote after watching!)
Submission Text Full Submission Page
This is third submissions of https://www.romhacking.net/hacks/101,even if this has been 10 years ago.
Ps:this patch is usa version

(Link to video)
Game objectives:
-Hard mode
-Aims for fastest time
-Abuses glitch
NemoRuby: Ps:I'm helping my friend to submit his run.It may be better than https://tasvideos.org/3452Sand https://tasvideos.org/1472S
Samsara: Claiming for judging.
Samsara: This is a very impressive run! The hack looks good as well, especially for 2003. Signing off on Darkman's review and accepting.
despoa: Processing...

He/They
Active player, Editor, Experienced Forum User, Reviewer (409)
Joined: 9/19/2021
Posts: 103
Location: Texas
Talk about a blast from the past with a hack hailing from the year 2003 if RHDN is to be believed. Review: From a moderate understanding of Mega Man 2 speed tech this seems pretty solid. Unnecessary jumps don't seem to be present here, which is good since walking is slightly faster. There was a moment where I noticed crash bomber being used on Quick Man when it did 1 point of damage but the refights showed that the buster did the same damage and the previous weapon choice on Quick Man was to save menuing time. There is one known improvement that I know of involving ghost platforms resulting from the egg swap glitch but this is something that would save subpixels. Small improvements like that would involve an incredibly high level of optimization work, alongside other factors such as frame rules, to implement and save small bits of time. I also found this user file from Shinryuu that only goes through Air Man's stage up to entering the boss: User movie #637931607312440317 This submission does reach the boss door sooner than the user file. As far as I can tell there's no other known TAS records that I can compare with.
Posted: 22 days ago
Quote

I actually forgot I ever played this hack (it was like 15 years ago) until I watched this TAS. It was actually kind of cool that there was some custom soundtracks (even if most/all of them were from other Mega Man games).
Posted: 14 days ago
Post subject: Movie published
Quote

I didn't notice this until now. This seems to be pretty good and it avoids unnecessary jumping as well. Cloud area was cleverly done at Airman. I will watch the rest of the video anytime soon. I have worked on this hack at random and I've finished three first stages. It seems that cui found a better way to handle Airman cloud area and I tweaked it a bit further and by using one menu entry instead. I've gained 66 frames so far. My Heat and Crash stages seems to be much more faster but I haven't done any real comparisons yet. I compared my Airman fight (without double death because on my setup it cannot be used without losing time) and with cui's (with double death version), my battle is still around 24 frames faster. Here's an old, partially deprecated video. It doesn't complete Heat or show Crashman at all. Link to video This shows my recent idea for Crashman (Converted from webm so quality might be kind of bad) Link to video
Posted: 13 days ago
Quote 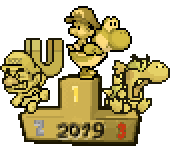 Why does this keep happening??
Posted: 12 days ago
Quote

I found an extremely interesting setup that lets me get a zip off a ghost platform. The ghost haunts slot 18, so I had to be extra careful to make sure nothing would spawn before I was ready for it. The moving platforms in particular would ruin it because their code is able to properly clean up the bad data. This is 100 frames slower, but I know we can do better. Link to video
1670553325