Welcome, this is the discussion board of TASVideos.
If you have a question, please read the Site FAQ first to see if your question has already been answered.
Be sure your posts conform to Site Rules
We also have a Discord server and an IRC channel #tasvideos at irc.libera.chat...
1 2 35 36 37 41 42
Posted: 6/11/2011 8:13 PM
Quote

The .smv was sent, but there's just better luck with Krow (kinda), the double jump on Lava Lagoon and also a good luck on Kleever. oh, and thank you for the explanations, it's starting to make more sense.
I am old enough to know better, but not enough to do it.
Posted: 6/11/2011 11:32 PM
Quote

I'm doing a small update on our 102% run, trying to include some of Umihoshi's tricks. here's what I did so far: http://dehacked.2y.net/microstorage.php/info/1572564514/CDN-DKC2-102P.smv sadly some tricks didn't work, like his Kreepy Krow's fight, but the ones that worked saved quite some time. (455 frames faster up to K. Rool Duel) edit: the "webs away" trick from DKC3 also work on DKC2, but there's no "solid" walls in this game, the web must then hit the ceiling and it can't save time most of the time. (actually, it was already used on the bonus room of Toxic Tower, the only place where it can save time.)
I am old enough to know better, but not enough to do it.
Posted: 7/26/2011 12:15 AM
Quote

Thank you guys. But there's something bothering me; sometime ago I did a run that has two endings, it uses a kind of in-game cheat to collect all the 72 Bonuses Coins on Pirate Panic then I collect them all again on the stages to reach 102%, defeat K. Rool on the Lost World then on his flying croc. here's the original run: http://dehacked.2y.net/microstorage.php/info/24087158/DKC2_Patchwork_TAS.smv I really want to redo/improve that run, but I'm afraid it would be considered cheating. What you guys think about it?
I am old enough to know better, but not enough to do it.
Posted: 7/27/2011 6:29 PM
Quote

I think it stands as a concept/demo, but not as an improvement to the 102% since it does use an in-game cheat. The two movies are too similar for them to be published side by side; maybe the 102% movie page can be edited to include the 102%-cheat.smv as an additional download?
☣ Homepage ☣ Retired
Posted: 7/28/2011 4:01 PM
Quote

I'm picking up the improvement again, but I want to use the new emulator, lsnes, this time. ( http://www.elisanet.fi/ilari_l/lsnes-rr1-delta5epsilon2.7z ) I did a quick test and the results are pretty good; there's a lot less lag on the new emulator, but the sound seems a little worse than Snes9x. So, depending on the gains with lag reduction vs sound problems, it may be better to stick with Snes9x, anyway, we'll see.
I am old enough to know better, but not enough to do it.
Posted: 3/24/2012 9:07 PM
Quote 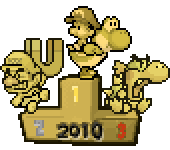 In UI or when captured to .avi? UI has known problems with sound (TODO: Improve that sound). The emulator being unable to reach 100% speed (some chips are very heavy to emulate) will totally destroy sound quality. Video capture isn't perfect due to odd sampling rate, but mode 1 (32040Hz) or 2 (32041Hz) capture should be pretty good (the default 32kHz capture should also be good). For when one needs the best possible quality (encoding for publication), the AVI dumper dumps .sox that contains bit-for-bit exact dump of sound data from bsnes core.
Posted: 3/26/2012 8:57 PM
Quote

In UI, but the sound problems may be my crappy computer's sound card, the MAIN THEME, BRAMBLES and SHIP DECK 2 have a lot of crackles on lsnes that are less noticeables on Snes9x 1.51. Another thing that I noticed is; lsnes says I have just 131 frames of lag on the title screen, Snes9 1.51 says that I have 200 frames of lag, but the first possible frame to press start is 852 on both emulators!?! Or there is something wrong with the lag counter on lsnes or I do not know what those numbers after the actual frame means :( anyway, I'm still testing, but with the amount of extra lag I don't know if the run will be interesting to watch; when Rambi charges through those rats on the first stage there's so much lag that it seems to just walk...
I am old enough to know better, but not enough to do it.
Posted: 4/13/2012 4:03 PM
Quote

Okay, I'm back to Snes9x 1.43 doing a run that probably will get rejected, or at least cause some controversy. It's not meant to obsolete the 102% run, although I'll not complain if for any reason it happen :) Here's my objectives; Uses The Hard Mode Uses an in-Game Cheat Do Not Uses a Game Restart Sequence Full Completion, 102% Is a Demonstration well, some parts of the new run are faster/more optimized than the current run, but again it's not meant to beat it. I'm fighting Krow at the moment with an excellent luck; I enter in the first possible frame with no useless eggs.
I am old enough to know better, but not enough to do it.
Posted: 4/13/2012 4:08 PM
Quote

Yeah, for that too, but I'm also getting all 75 Kremcoins in the first stage, Pirate Panic and that's the "controversial" part... but by doing this, I can eliminate the reset from the run, it also avoids some backtracks. anything else will be needed though, like complete the bonuses and collect the DK coins.
I am old enough to know better, but not enough to do it.
Posted: 4/13/2012 5:47 PM
Quote

If you specify it as a demonstration run, then I see no reason for controversy in using that cheat since the final product wont obsolete any run on the site. Out of curiosity, are you going to try and achieve the worst ending as fast as possible, or 102% as fast as possible?
☣ Homepage ☣ Retired
Posted: 4/13/2012 5:49 PM
Quote

The difficult code is okay, I already used it in the 102% run, but the 75 Kremcoins will allow me to have some advantages on the game; there's no need to backtrack for Klubba's Kiosks, I can fight the second form of K. Rool before the first, a long conversation with Cranky will be out of the run and I can show the credits. But, in the description of this YouTube video, the guy says it's not a cheat, but a shortcut, like the Warp Barrels; http://www.youtube.com/watch?v=ZnUCq-Ya7Uc So, I'm thinking about change some of my objectives and make this an updated version of the 102% run; Plays at the hardest difficulty Takes damage to save time Uses a restart sequence Uses warps and a shortcut The authors will be the same as I'm reusing almost all stages of the current run, and I'd like to ask you guys if you agree with that guy about it being a shortcut and not a cheat.
I am old enough to know better, but not enough to do it.
Posted: 4/15/2012 4:20 PM
Quote

Joined: 5/12/2009
Posts: 747
Location: Brazil
Dude, i really don't see this beeing a shortcut. In fact it's a cheat code and i remember reading about this trick in a magazine some time after the game was released. This is a code or something that was (it seems so) intentionally created and left in the game. So i don't think this would be allowed to compete with the current 102% run. Btw, you would try the lsnes, did you find problems to use it?
Posted: 4/15/2012 5:43 PM
Quote

I also think it is a cheat, but there's some accepted runs that uses debug menus, SRAM and passwords. But by collecting all 75 Kremcoins afterward the normal way will kinda make the cheat lose it's advantages. (all of the above are against the rules, or so I think they should be, but it's not a reason for rejection anymore) Yes, I did, but some tricks are simply impossible to do due to the amount of extra lag on the new emulator, also the sound is a little worse.
I am old enough to know better, but not enough to do it.
Posted: 4/20/2012 7:05 PM
Quote

I'm doing the final boss fight, and since there's no way to make it slower I can predict the length of the new run; 00:45.30 seconds faster than the published 102% run. As you can see by the time saved, the cheat doesn't destroyed the run but instead it adds more gameplay into it, so I'll submit it as an improvement to the 102%. The authors will be the same; Comicalflop, Dooty and NxCy as I'm reusing a lot of their inputs, but it will not be just a make up version of the old run, there's plenty of new strategies throughout the run. If it gets accepted, good. If not, well, it's not the end of the world, the published run is already ours anyway :) I'll submit it real soon.
I am old enough to know better, but not enough to do it.
1 2 35 36 37 41 42