This page documents information about Captain Comic. Many of the tricks demonstrated here are near impossible in real time and documented for the purposes of creating Tool-assisted Speedruns.

The Adventures of Captain Comic is one of the earliest arcade-style platform games for DOS. There are five revisions of this game. Later revisions fix bugs that are useful for TAS, so it's best to stick with Revision 1.
The DOS version is the original version of the game. There is also an NES port, which is completely different from the DOS one. It uses a completely different engine and even the levels look like they were completely remade.
There is a sequel for DOS, Captain Comic II: Fractured Reality.

To win, the player must collect the three treasures: Gems, Crown, and Gold. These are the only items the game checks for. Once all three are collected, the game starts a countdown timer for 20 game ticks, after which the game-end sequence begins.

Unlike many DOS games, Captain Comic is not synchronised to the VGA refresh. Instead, it runs at a fixed "tick rate" of about 9.1 ticks per second, controlled by the programmable interval timer (IRQ 0). The precise tick rate is 14318180 / 12 / 65536 / 2 ≈ 9.103 Hz, with each tick therefore having a duration of 1 / 9.103 ≈ 110 ms. 14318180 is the frequency of the CPU's base oscillator; dividing by 12 gives the frequency of the base oscillator of the programmable interval timer chip; 65536 is the frequency divider used (the game doesn't touch this, but leaves it at its default); and dividing by 2 accounts for the fact that the game only updates on every other cycle of the interval timer (see the variables irq0_parity and game_tick_flag in the disassembly).
Long ticks and a lack of complicated processing mean that lag is not a consideration in this game.
The basic unit of distance in the game is 8 pixels, or ½ of a tile. Captain Comic is 2 units wide and 4 units tall. All enemies and items are 2 units wide and 2 units tall.
There are 8 levels in the game, each consisting of 3 stages. Every stage has a fixed size of 256×20 units. Comic moves at a speed of 1 unit / tick when walking. It takes 254 / 9.103 ≈ 27.9 s to walk from one extreme of a stage to the other.
The game sets a checkpoint whenever Comic crosses a horizontal stage boundary or goes through a door. When you die with lives remaining, you respawn at the most recent checkpoint.

The game engine only distinguishes solid and non-solid tiles. It makes sure that you can't enter any solid tiles moving vertically; however when moving horizontally only the foot level is checked for collisions. You can see this, for example, right at the start of the game: you can just walk into the first platform and then jump up onto it, whereas you can't jump through the second platform, even though they are identical in terms of solidity.

Holding the jump key when starting the game, or respawning after dying, allows the player to jump very far: the jump counter that normally restricts upward acceleration to a few frames for a normal-sized jump is in these cases initialised incorrectly and allows accelerating upward for 255 frames, which is long enough to traverse an entire stage. You can even let go of the jump key for a while: as long as the ground isn't touched for more than 1 tick, the counter isn't reset (but it still keeps on counting down). Touching the ceiling resets your vertical velocity, but touching the top of the level does not, and holding the jump key there for too long will lead to your vertical velocity underflowing from a large negative number to a large positive number, sending you downward so quickly that on the next tick you will be almost at the bottom of the screen—and if you don't land on anything there, you will be below the bottom screen and dead in the following frame.
The hover state can be carried across stages but not through doors, since you can only enter the door when on ground.
The hover glitch works in Revisions 1 and 2. It doesn't work in Revisions 3, 4, and 5.
This glitch, along with exploiting collision detection, can be abused to collect the Crown without playing the entire castle level. The Crown is located right at the start of the castle, protected by an L-shaped wall. You can, however, suicide after entering the level, then hover to the corner of the L, with your head at the height of the horizontal piece of the wall and your feet below it. You may then hover to the right and your head will glitch into the wall (since only your feet are checked for collisions at this point), and once you have hovered beyond the vertical part of the wall you can just fly upward, because only the tiles above your head are checked for collision when moving upward.
An animation showing Comic dying in CASTLE0, hovering up and clipping to collect the Crown, then dying to escape
But once you are in this area you cannot easily escape. You can do one of these options, ordered by increasing time:

The Teleport Wand is meant to move Comic 6 units in the direction he is facing. The teleport animation takes 6 ticks, so teleporting is nominally no faster than Comic's walking speed of 1 unit per tick. But the destination of the teleport is always rounded (leftward) to an multiple of 2 units. This means that if you start a teleport while standing between tiles (i.e., at an odd x-coordinate), a teleport actually moves you 7 units over 6 ticks, which is slightly faster than walking. Each time you do this, it saves 1 tick, but also Comic moves 1 unit closer to the left edge of the screen, and when you get too close, you can no longer use the trick. Teleporting to the right can never save time, but can lose time if you do it at an odd coordinate.
In Revision 1, this trick also allows for obtaining the Lantern early (apart from the hover glitch), because it allows for teleporting across a 6-unit-wide gap that wasn't supposed to be crossable that way.

The route requires seven intentional deaths, but there are more than enough extra lives on the way. Each treasure is a 1-up, as are Shields collected while at full HP. Certain score levels also aware an extra life.
The major difficulty is manipulating enemies for suicide warps/hover glitches. Manipulating enemies to just get out of our way is rather trivial.
Ideas for improvement:

Various programs, Lua scripts, disassemblies of all five revisions, and other resources are in a Git repository:
Some large or static files are not cloned by default. To download them, you need git-annex:
Among the files is a hud.lua script that permits you to advance time tick by tick, and see the values of hidden game variables. 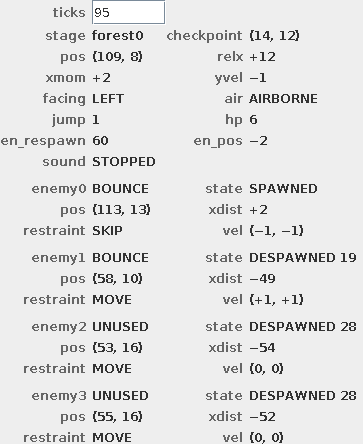