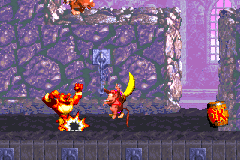 Watch
Donkey Kong Country 2 is a game made by Rare for the SNES in 1995, and is generally seen as one of the classics. In 2004, Rare released a Donkey Kong Country 2 remake, for the GBA.
The story is simple: King K. Rool, mad at Donkey Kong, becomes a Kaptain (with a K!) and kidnaps Donkey! (Oh no!) In exchange for Donkey Kong, Kaptain K. Rool wants the banana hoard. Of course Donkey and Diddy worked so hard that they don't want to just give it back. Kaptain K. Rool, however, kidnapped the wrong kong, and left the fast kong alone. Diddy (and Dixie) goes off to Crocodile Isle to try and save Donkey Kong!
The baseline tab shows the default movie beating the game as fast as possible without any special conditions.