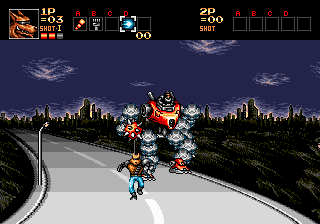 Watch Download (.gmv)
Author notes Discuss
7.1 / 10 Votes: 30
Contra: Hard Corps (1994) was the first game in the series to be exclusively released on a non-Nintendo console. The game took a lot of elements from previous installments and spiced them up with even more dynamic combat, different playable characters, nonlinear plot and about twice the amount of boss fights.
In this movie the author takes the secret "fifth ending", thereby skipping most of the game. If you want to see runs which play more of the game, then you should see this run (with the quickest "normal" ending) or this run (with the "best" ending).
The Japanese version was chosen because, for some reason, it gives the players a health bar, allowing them to take some damage without dying.
This is a 2.19 second improvement over the previous movie.
Published on 4/14/2008
Obsoletes:
Genesis Contra: Hard Corps "secret ending" by Ash Williams in 04:59.47