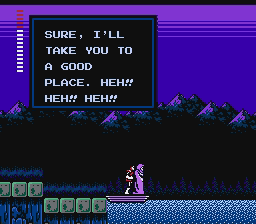 Watch on YouTube
Author notes Discuss
6.94 / 10
If science fiction is to be believed, the ultimate evolution for biological beings is to discard the physical body and become an entity of pure energy. For video game characters, it seems to be the ability to zip through walls. In this latest TAS by zggzdydp, Simon Belmont joins the league of characters possessing this ability.
Castlevania II: Simon's Quest is the story of Simon's horrible weekend without sleep. Two years after defeating Dracula, the hero is physically weakened by Dracula's curse. He must gather Dracula's remains and incinerate them at the ruins of Castlevania in order to end the curse.
This movie is 2 minutes and 23 seconds faster than the previous effort by the same author. We recommend to read his comments for explanations on how this improvement was achieved.
This movie has an Atlas Map encode of Laruba Mansion, which shows the standard encode overlaid on a zoomed out map.
Published on 6/7/2008 12:00 AM
Obsoletes:
NES Castlevania II: Simon's Quest by zggzdydp in 32:08.22

Emulator Replay:
FCEU 0.98.27
Download (.fcm)
Webmasters, please don't link directly to the files. Link to this page or the front page instead.
Republication of movies from this site is only allowed under the following conditions:
Do not label them with speculations. If unsure, ask the site staff for details.