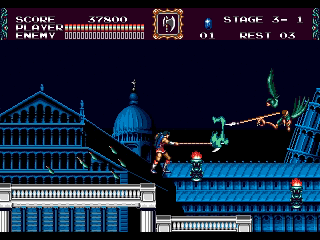 Watch Download (.gmv)
Author notes Discuss
8.42 / 10 Votes: 52
Castlevania's foray onto the Genesis sees two protagonists duke it out with Dracula and his minions: John Morris and Eric Lecarde. John Morris carries the famed whip, and Eric Lecarde wields a spear.
This run sees Eric Lecarde take his turn against the vast minions of Dracula. While Lecarde moves slightly faster than Morris, lag from his magic spear had to be taken into account more often, and he is weaker against bosses. For more precise details, see the authors' detailed submission text for Morris.
This movie has a full Atlas Map encode, which shows the standard encode overlaid on a zoomed out map.
Published on 11/8/2008 12:00 AM
See full publication history
Game:
Castlevania: Bloodlines
Genres:
Action
Platformer

Emulator Version:
Gens 9.5
Webmasters, please don't link directly to the files. Link to this page or the front page instead.
Republication of movies from this site is only allowed under the following conditions:
Do not label them with speculations. If unsure, ask the site staff for details.