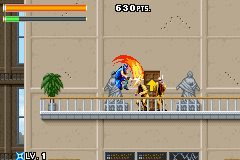 Watch on YouTube
Author notes Discuss
8.3 / 10
Published on 2/10/2009
Ninja Five-O features a ninja cop battling evil ninja masters and terrorists.
Joe Osugi, bizarre 'anti-terrorist ninja', is called in to assist the local police, who seem to be completely useless in rescuing some hostages.
The game is basically a series of rooms connected together. Your job is to rescue the hostages and then escape the stage through the red door. You have in your arsenal a three-level shuriken, a sword, and a grappling hook similar to the one from Bionic Commando. Joe also has two special abilities: to make himself invincible and to attack all enemies on screen.
This new version by Cardboard is 1 minute and 31 seconds faster than the previous one by nitsuja, containing even more ropeswinging acrobatics and ninja madness.
Obsoletes:
GBA Ninja Five-O by nitsuja in 18:06.90