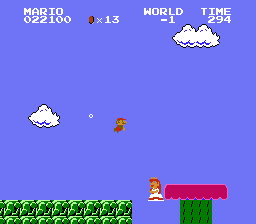 Watch on YouTube
Author notes Discuss
7.08 / 10
Published on 2/10/2009
This game is Super Mario Bros., the original, but on Famicom Disk System. It is much similar to the ROM version of the game, except for one minor difference that is demonstrated here.
The −1 stage is completely different. In the NES and Unisystem versions, the −1 stage repeats infinitely and cannot be completed, but in FDS, it can be completed, and then come −2 and −3.
The −3 stage in FDS is a castle level, and completing it ends the game, even though it says "princess is in another castle". The princess is not seen in the ending, but she is sighted twice in the −1 stage, as shown in this movie.
This movie is 3 frames faster than the previous one due to better wallpassing.
Obsoletes:
FDS Super Mario Bros. "-3 stage ending" by HappyLee in 02:46.35

Emulator Replay:
FCEU 0.98.28
Download (.fcm)
Webmasters, please don't link directly to the files. Link to this page or the front page instead.
Republication of movies from this site is only allowed under the following conditions:
Do not label them with speculations. If unsure, ask the site staff for details.