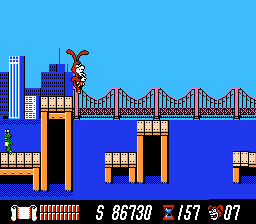 Watch Download (.fcm)
Author notes Discuss
5.95 / 10 Votes: 23
Yo! Noid is a game centered around a short man in a rabbit suit making his way through New York City to defeat an identical man in a different color rabbit suit for a pizza reward. The game was conceived as part of a 1980s advertising campaign for Domino's Pizza. As anyone who has played the game knows, the game is quite difficult, since the controls are sluggish, one hit kills you, and the pizza bonus games at the end can be difficult to win if you don't pick up enough useful powerups.
With some movement glitches, warps, and luck manipulation, nesrocks beats this game very quickly. Not only that, to make the run even harder and more impressive, he doesn't kill any enemies.
Watch this run being played back on a real console.
Published on 7/5/2009
See full publication history
Game:
Yo! Noid
Genres:
Platform