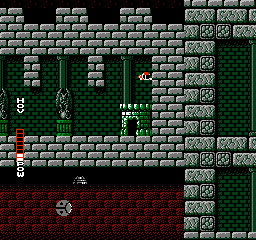 Watch Download (.fm2)
Author notes Discuss
6.85 / 10 Votes: 9
Blaster Master is a fairly long game involving a random hero that jumps down a hole after his mutant frog, finds a tank, and proceeds to blow up a few bosses and rescue said frog. It's complicated.
In this movie the hero gets bored with the tank early on, skips the bosses and mostly decides to just go straight to the final boss and blow him up. The frog is saved and dissected, and Biology 101 is passed. Hooray!
This movie plays on the European version of the game, which includes a few bugs such as stopping movement by pausing and allowing double (and more) jumping. A changed zip mechanism is also in the European version which allows warping through things you really shouldn't be able to warp through.
If you would like to see more of the game, we also have a warpless Blaster Master movie here that plays on the US version.
Published on 11/17/2009
See full publication history
Game:
Blaster Master
Genres:
Action
Platform