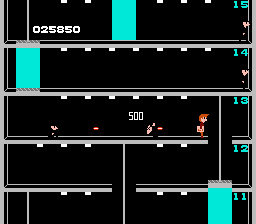 Watch Download (.fm2)
Author notes Discuss
5.48 / 10 Votes: 24
A rather simple, unique classic game.
The hero of this game is a spy/agent who raids buildings infested with men in black. He collects important documents from various apartments/closets (which, for the sake of simplicity, are colored indicatively), and then leaves by his car to the next raid.
After raiding the last building, he goes to raid the same buildings once again, ad infinitum.
Even a small game like this isn't free of bugs. The unsafe elevators of this game offer a few maneuvers that should not be attempted in real life.
Four levels were played.
This is an improvement of just over a minute over the previously published run.
Published on 11/30/2009 12:00 AM
Obsoletes:
NES Elevator Action by Brushy in 07:59.37