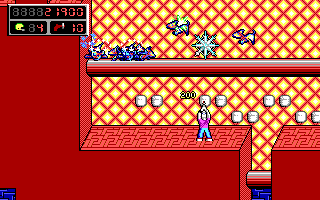 Watch on YouTube
Author notes Discuss
6.68 / 10
Published on 5/3/2010
Commander Keen 5: The Armageddon Machine (1991) is a part of the popular Commander Keen saga, developed by id Software. It is a direct continuation of the previous episode, in which Keen has learned from the Oracle of Gnosticus IV that the evil Shikadi plan to blow up the galaxy with their doomsday device, the Omegamatic (It slices! It dices! It causes a 100,000 light year-diameter quantum explosion!). Naturally, he sets out to sabotage the machine and stop the Shikadi.
Using a series of glitches, Keen completes only four stages to get to the end game, only one of which takes any significant length of time, and destroys the Quantum Explosion Dynamo, the core of the Omegamatic in the impossibly short time of 2:42. In the process, he manages to inadvertently prevent the Shikadi from accomplishing their escape (though you have to watch the ending very closely to figure out that this has happened here).
Although this is not the first submitted DOS movie, it has the distinction of being the first to be published, thanks to use of the recently approved emulator JPC-RR.
See full publication history
Game:
Commander Keen: Episode 5 - The Armageddon Machine
Genres:
Action
Platformer

Emulator Replay:
JPC-rr 10
Download (.jrsr)
Webmasters, please don't link directly to the files. Link to this page or the front page instead.
Republication of movies from this site is only allowed under the following conditions:
Do not label them with speculations. If unsure, ask the site staff for details.