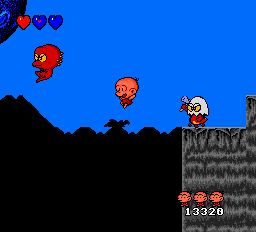 Published on 10/4/2010
Bonk, a young caveman with a big noggin, intended to become the TurboGrafx-16's flagship character, starred in three games, Bonk's Adventure, Bonk's Revenge, and Bonk III.
Since the system was generally considered a commercial failure, the first two games were ported to other systems like the Nintendo Entertainment System and the Game Boy, and two original games in the series were even made on the Super Nintendo.
In his debut, Bonk's Adventure, you play as him on his quest to rescue Princess Za, a small pink and cute little reptile, from the evil King Drool, a huge and ugly tyronnosaurus.
Jerfo completes this quest in only 24 minutes, by making Bonk fly over most stages while he spins himself in the air, bouncing himself on enemies. Make sure you're ready to hear that spinning sound over and over again!
Note: There are rapid flashing lights during the cutscene where the rocket flies up to the sky and when King Drool is defeated, which may cause epileptic seizures.
See full publication history
Game:
Bonk's Adventure
Genres:
Platformer

Emulator Replay:
PCEjin svn128
Download (.mc2)
Webmasters, please don't link directly to the files. Link to this page or the front page instead.
Republication of movies from this site is only allowed under the following conditions:
Do not label them with speculations. If unsure, ask the site staff for details.