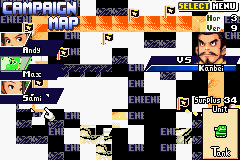 Watch on YouTube
Author notes Discuss
6.5 / 10
Without warning, the forces of Blue Moon mount an assault on the nation of Orange Star. Only Orange Star's new advisor, in collaboration with Orange Star's commanding officers, can stop them and get to the truth behind this sinister plot.
At least, that's what they'd normally do if they weren't capable of just magically compelling their opponents to surrender at the sight of them.
Using a glitch in the design maps mode of the game, this run completes the game impossibly quickly by forcing opponents to yield, allowing instant wins in the campaign missions.
Published on 11/28/2010 12:00 AM
See full publication history
Game:
Advance Wars
Genres:
Strategy

Emulator Replay:
VBA-rr v22
Download (.vbm)
Webmasters, please don't link directly to the files. Link to this page or the front page instead.
Republication of movies from this site is only allowed under the following conditions:
Do not label them with speculations. If unsure, ask the site staff for details.