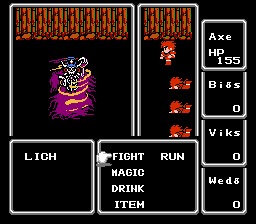 Watch on YouTube
Author notes Discuss
7.33 / 10
Final Fantasy is one of those games which needs no introduction to most gamers. For the rest of you, the game follows four generic heroes who are trying to restore the four orbs which have been contaminated, and ultimately defeat Chaos.
Unfortunately only one of the warriors is actually a hero; the rest are sissies who died early on during the quests. Strange as this may sound, much time is saved by doing so since fewer commands need to be entered every time the player runs from a random encounter.
Even if you see a 10 seconds difference between this and the previous movie, don't get fooled! This version is actually 00:02.45 seconds faster! This mistake is due to the movie file format change (FCM to FM2). This improvement is done by fighting the boss Garland faster than before, and by using some tweaks you can see in the author's comments.
Published on 1/4/2011 12:00 AM
Obsoletes:
NES Final Fantasy by TheAxeMan in 1:10:16.18

Emulator Replay:
Download (.fm2)
Webmasters, please don't link directly to the files. Link to this page or the front page instead.
Republication of movies from this site is only allowed under the following conditions:
Do not label them with speculations. If unsure, ask the site staff for details.