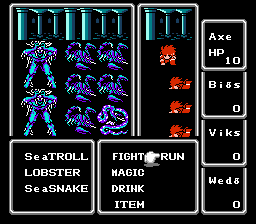 Watch Download (.fm2)
Author notes Discuss
7.18 / 10 Votes: 13
The original Final Fantasy follows four heroes who are trying to restore the four orbs which have been contaminated and ultimately defeat Chaos.
Unfortunately only one of the warriors is actually a hero; the rest are sissies who die early on during the quests. Strange as this may sound, much time is saved by doing so since fewer commands need to be entered every time the player runs from a random encounter.
On TASVideos, perfect runs are continually improved, often through very unexpected changes. This run by TheAxeMan improves the old TAS by 00:09.10 seconds by getting lower stats and spending more time at inns and item shops.
For those who think they have a better sense of humor than the author, he has provided Python scripts which allow you to recreate the entire run with your own choices for character names substituted for his. Available as a Windows standalone program or as source.
The downloadable videos and the YouTube stream contain soft subtitles with commentary from TheAxeMan.
Published on 7/20/2012 12:00 AM
Obsoletes:
NES Final Fantasy by TheAxeMan in 1:10:06.81