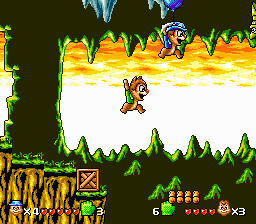 Watch Download (.gmv)
Author notes Discuss
6.43 / 10 Votes: 14.5
Squirrel King is a platform video game produced, without license from Sega, by the Taiwanese developer Gamtec for the Mega Drive. Gamtec is also responsible for the development of a number of other games, including many for the Gamate handheld system.
It appears to be loosely based upon Capcom's Chip 'n Dale: Rescue Rangers video games for the Nintendo Entertainment System, sharing its gameplay mechanics, although it is not licensed by Disney. As in the aforementioned game, the main character must throw crates at the enemies in order to defeat them.
This game was eventually used as the basis for the unofficial Mega Drive Super Mario World game. Some of the levels in this game have their background music based on that of the Super NES video game Donkey Kong Country.
Published on 2/22/2011
See full publication history
Game:
Squirrel King
Genres:
Platform
Unofficial game