Similarly to the previous movie, this is more a fixup to make use of new glitches than a full re-run. Although Nitsuja was not actively involved in any part of this improvement, I list him as coauthor because his input stil comprises more than 90% of the movie.

Hydrocity zone 2, Launch Base zone 1 and 2, and Hidden Palace Zone are improved. All other levels are untouched, except for correction due to changes in lag, and some quick pauses inserted to correct luck differences.
I PM'ed Nitsuja requesting permission to use the input from his TAS, but I have not heard back, and it appears he has not even read the PM. Since I have no other way to get in contact with him, I've gone ahead and submitted this and credited him as coauthor. I _will_ cancel this submission if he contacts me and tels me that I do not have permission to use his work.

This is the only new trick used that Nitsuja was aware of when he submitted his previous run. He did not use this trick because it requires dying in order to perform. The death takes 9 seconds, but removes the boundary lock which prevents the player from zipping past the left edge of the level and saving 24.
This is also the only level where none of Nitsuja's input survives.

The first four seconds of this level are Nitsuja's input.
The first thing you'll notice is that it takes a long time for me to reach the elevator. The reason for this is because the Flybot will unload if it gets too far behind, and the new trick requires taking damage while entering the elevator.
By taking damage while entering the elevator, control is maintained while inside the elevator. By using a spindash or two to pause the camera, the elevator can be made to unload by getting too far ahead of the screen. This leaves sonic in the middle of the floor, with the "Ice Cap" glitch in effect. By zipping left in the floor, Sonic can go past the level boundary, where he will then wait for the camera to bring him to _Knuckles'_ boss area. The fact that Knuckles faces two of these allows a new strategy: by using the insta-shield, Sonic can hit both bosses at once. By hitting both bosses at once, sonic reverses direction twice and ends up heading the same direction he was going before he hit them. This drastically reduces time between hits, by allowing him to jump from tails, hit both bosses, and then be caught again by tails, who is still ascending, and thereby follow the bosses more closely.
Lastly, because this area of the level differs for sonic between the end of Act 1, and the start of Act 2, Sonic can die at the start of the score tally, in order to skip it, and start the Act over at his normal starting location.

By starting from a death, the camera is not stuck within the boundaries of the boss fight, and Sonic can immediately spindash right, with no obstructions.
The first 6 seconds, and last 8 seconds are my input. Everything else is Nitsuja's, with minor hex-edits to make it sync despite slightly differing subpixel positions.

Wait... what?
(I don't even have control during this.)

The first 6 seconds of Tails' input are Nitsuja's, as are the first 16 seconds of Sonic's, the 2 seconds when the camera starts to move after the Knuckles fight, and the 2 or so seconds at the end of the level, when Knuckles wakes up after the Master Emerald has been stolen.
The improvement here comes from the Knuckles boss fight, and requires Tails' assistance. Tails holds Knuckles down while Sonic lays the smack on him. This is incredibly satisfying after the cutscenes in Angel Island, Launch Base, and Mushroom Hill.

Comparison Table (for serious this time)

For some reason, when Launch base is glitched this way, the cutscene where it's supposed to show Sonic and Tails watching the Death Egg falling ends 549 frames faster... and also doesn't show Sonic, Tails, or the Death Egg.
The real time savings is 4574 frames, or 1 minute 16 seconds 14 frames
The rerecord count started from the rerecord count of Nitsuja's TAS, rather than 0. This run was accomplished by re-TASing parts or all of each of the improved levels, and splicing it back into Nitsuja's TAS. This game only desyncs due to luck issues and lag differences. Since all luck issues are a result of frame rules on the universal frame timer, I would correct desyncs by adding short pauses during the loading time of the desync'ed level, rather than replaying the desync'ed portion.

Thanks to Eredani, Orkal (aka GoldS), and Skylights1 for information about the tricks used in Hydrocity, Launch Base, and Hidden Palace, respectively.

In-game: If one were to aim completely for in-game time, they could die at the end of the Launch Base 1 score tally, and the cutscene would play normally -- full length, but no timer running. If one were to discount time spent during sections that end in death, one could die in Sky Sanctuary after the initial cutscene, to lower the final timer by about 22 seconds. Real-time: If one were to remove the pauses, and instead replay the desynced portions, about 40 frames could be saved. I am not aware of any other improvements.

NesVideoAgent: Hi! I am a robot. I took a few screenshots of this movie and placed them here. I'm not sure I got the right ROM though. (I tried Sonic and Knuckles & Sonic 3 (W) [!].gen, which was the closest match to what you wrote.) Well, here goes! Feel free to clean up the list. 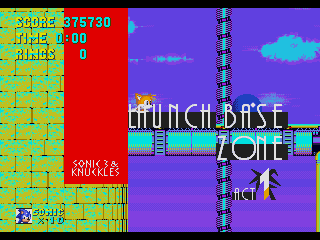 BoltR Accepting as an improvement to the previous run.
DeHackEd: Encoding to AVI
Last Edited by TASVideoAgent on 11/6/2008 9:16 AM
Page History Latest diff List Referrers