NES Gargoyle's Quest II: The Demon Darkness by goofydylan8 in 27:43.08 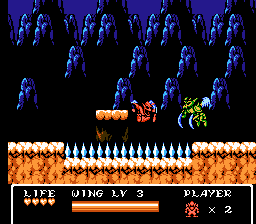 Watch Download (.fm2)
Author notes Discuss
6.76 / 10 Votes: 10
A long time ago, before human being appeared, there lived a monster named Firebrand. In this game, Firebrand (the red gargoyle) fights against the evil that has invaded his homeland. Along the way, he becomes more powerful and becomes able to fly longer, jump higher, and shoot more weapons.
goofydylan8 conquers this game in a little under 28 minutes with careful lag management, damage-boosting, and aggressive boss fights.
TASVideos also has movies of this game's prequel for the Game Boy and sequel for the Super NES.
Published on 3/23/2012
See full publication history
Game:
Gargoyle's Quest II: The Demon Darkness
Genres:
Adventure
Platform