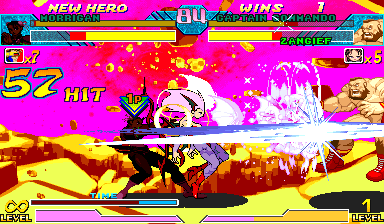 Marvel vs. Capcom: Clash of Super Heroes is a 1998 Arcade fighting game developed by Capcom. It continues the lineage of Capcom fighting games featuring characters from Marvel comics, and is the game that paved the way for the hugely successful Marvel vs. Capcom 2.
Each team has two characters (which can be simultaneously controlled at certain times), plus a third summon assist character. This leads to quite a few things happening on the screen at once. There are quite a few glitches showcased; see the author's comments for a complete listing.
Published on 9/3/2012
See full publication history
Game:
Marvel vs. Capcom
Genres:
Fighting

Emulator Version:
FBA.0.0.2
Webmasters, please don't link directly to the files. Link to this page or the front page instead.
Republication of movies from this site is only allowed under the following conditions:
Do not label them with speculations. If unsure, ask the site staff for details.