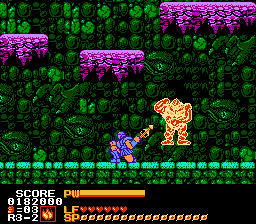 Watch Download (.fm2)
Author notes Discuss
6.77 / 10 Votes: 14
Astyanax (1990) is the story of a studly 16-year-old boy named Astyanax who is summoned to the world of Remlia in order to save the enchantress Princess Rosebud from the evil wizard Blackhorn, who wants to rule the world.
It is a somewhat clumsy game. For one, Astyanax is twice as big as he appears, and so he is easily hit unless one plays carefully. The controls are also very bad. The sum of these factors is that it's a difficult game to play, but that's part of what makes this movie interesting—especially for those who have played this game.
Thanks to effective lag management and using all powers, the author has achieved 32.66 seconds worth of improvement over the previous movie by dragonxyk.
This movie has a full Atlas Map encode, which shows the standard encode overlaid on a zoomed out map.
Published on 9/16/2012
Obsoletes:
NES Astyanax by dragonxyk in 15:43.25