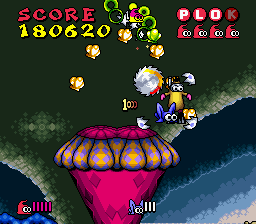 Watch on YouTube
Author notes Discuss
7.81 / 10
Published on 9/24/2012
In this strange game, you play a character named Plok who wants to get rid of all the fleas on his home island. Plok has the ability to shoot his arms and legs to harm enemies. To complete some stages, Plok has to kill all the fleas in the stage before the goal flag appears at the end of the stage.
Plok is in a hurry, so he looks for opportunities to travel faster. He finds slides lying around almost everywhere. He finds nice presents making him a lot faster. He finds tiny holes in the Flea Pit for big shortcuts. He finds helpful sawblades, nice guys pushing him into the right direction, and even a lovely fish which helps him climb a mountain. Even water helps him climb a mountain to discover one more slide. He also takes advantage of the fact that he can do bigger jumps without his legs.
Though the improvement over the previous movie seems to be only 02:15.17 minutes, it's actually almost 4 gameplay minutes, because the previous movie did not complete the credits.
Obsoletes:
SNES Plok by kooz in 31:15.55

Emulator Replay:
Snes9x 1.51
Download (.smv)
Webmasters, please don't link directly to the files. Link to this page or the front page instead.
Republication of movies from this site is only allowed under the following conditions:
Do not label them with speculations. If unsure, ask the site staff for details.