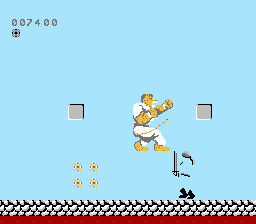 Watch on YouTube
Author notes Discuss
4.93 / 10
Published on 11/19/2012
Cheetahmen II is the unfinished sequel to game #52 of Action 52. The game contains 6 of the 10 levels originally proposed, in which the player takes control of Apollo, and Hercules, Aries, swiching off after every second level. Sadly, it's only possible to play 4 of the levels without altering the ROM image or experiencing a very rare glitch that starts the game with Aries.
illayaya completes these four levels in 02:20.04.
See full publication history
Game:
Cheetahmen II
Genres:
Platformer
Unofficial game

Emulator Replay:
FCEUX 2.1.5
Download (.fm2)
Webmasters, please don't link directly to the files. Link to this page or the front page instead.
Republication of movies from this site is only allowed under the following conditions:
Do not label them with speculations. If unsure, ask the site staff for details.