Genesis Might and Magic II: Gates to Another World by Dammit in 06:15.33 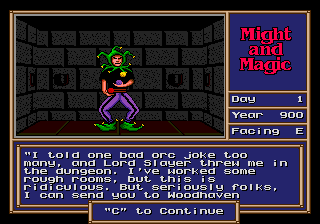 Watch Download (.gmv)
Author notes Discuss
4.99 / 10 Votes: 9
Might and Magic II: Gates to Another World is an RPG with some amazingly grand scope. Levels up to 255, hp to 65535, +63 weapons, battles with 255 opponents, time travel, and characters dying of old age.
This run takes care of money problems by finding a nameless, glitched party member and taking all his stuff. Teleportation is used in some places it normally can't be by resting to reset the forbidden flag. Walking backwards is employed when it reduces screen draw time. Temple blessings are used rather than a cleric, and items are used instead of a sorcerer.
Published on 12/12/2012
See full publication history
Game:
Might and Magic II: Gates to Another World
Genres:
RPG