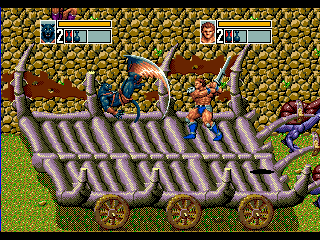 Watch Download (.gmv)
Author notes Discuss
6.83 / 10
Buff guy and Kitty guy run around and kill things. Kitty guy swings on Buff guy's sword. Things die.
More seriously, Golden Axe III is one of the sequels to the original Golden Axe. One notable change is that players can now pick several different routes through the game by making choices at certain intersections. Also, the two players can use a "team-up" attack for high damage, which is used very frequently in this movie.
Published on 2/6/2013 12:00 AM
See full publication history
Game:
Golden Axe III
Genres:
Action
Adventure
Fighting

Emulator Version:
Gens 10a
Webmasters, please don't link directly to the files. Link to this page or the front page instead.
Republication of movies from this site is only allowed under the following conditions:
Do not label them with speculations. If unsure, ask the site staff for details.