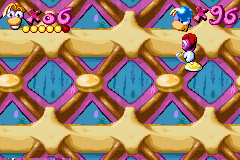 Watch Download (.vbm)
Author notes Discuss
7.44 / 10 Votes: 5
When a villain known only as Mr. Dark appears, trouble brews in Rayman's world. Mr. Dark captures the Toons - the source of light - and Rayman's friends. Without the light, evil creatures begin to roam, making the world unsafe for everyone. It's up to you, as Rayman, to free your friends and put an end to Mr. Dark's dastardly schemes!
Rayman is a side-scrolling platformer starring the titular Rayman, a big-nosed chap with no arms or legs. Rayman can jump and use his hair to hover for a short period of time. He can also attack by throwing his fists, or winding up his fists for a more powerful punch. He can occasionally find special powerups that grant him unlimited flying power, giving him the ability to navigate through tricky mazes.
Aside from the platforming action, the other notable feature of Rayman is its large, detailed and vibrant graphics, which have helped it to stand out from most other similar games in the genre.
Published on 5/5/2013
See full publication history
Game:
Rayman Advance
Genres:
Action
Platform

Emulator Version:
VBA-rr v23.2
Webmasters, please don't link directly to the files. Link to this page or the front page instead.
Republication of movies from this site is only allowed under the following conditions:
Do not label them with speculations. If unsure, ask the site staff for details.