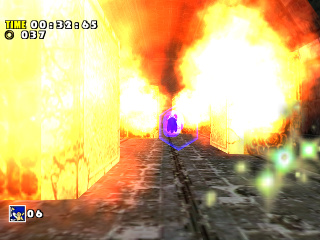 Sonic Adventure DX: Director's Cut, an enhanced port of Sonic Adventure on the Sega Dreamcast, follows the well-known Sonic the Hedgehog as he races to stop Dr. Eggman's evil plans once again — this time in 3D. A notable feature in the game is five extra story modes for some of the other Sonic characters, including Tails, Knuckles and Amy.
This run by THC98 completes Sonic's story, utilizing out of bounds glitches and super fast spindashes for maximum speed. For more tool-assisted Sonic Adventure, see the run of Tails's story by the same author.
Note: The audio is slightly faulty because of a bug in Dolphin's DSP emulation engine.
Published on 10/13/2013 12:00 AM
See full publication history
Game:
Sonic Adventure DX: Director's Cut
Genres:
Platformer

Emulator Version:
Dolphin 3.0-735
Webmasters, please don't link directly to the files. Link to this page or the front page instead.
Republication of movies from this site is only allowed under the following conditions:
Do not label them with speculations. If unsure, ask the site staff for details.