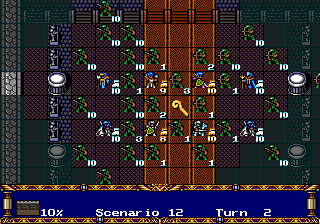 Watch Download (.gmv)
Author notes Discuss
6.49 / 10 Votes: 5
In this traditional strategy RPG, every stage normally has to be approached carefully and with a full stock of troops. All of that was cast aside in ars4326's run, where extreme luck manipulation became the driving force in obtaining victory after unlikely victory. Garett's team operated as a virtual skeleton crew as only the bare minimum of resources were deployed in his struggle against the Dalsis Empire and a foreboding, ancient evil.
Downloadable encodes have the author's commentary as soft subtitles.
Published on 10/16/2013
See full publication history
Game:
Warsong
Genres:
RPG
Strategy

Emulator Version:
Gens11svn304
Webmasters, please don't link directly to the files. Link to this page or the front page instead.
Republication of movies from this site is only allowed under the following conditions:
Do not label them with speculations. If unsure, ask the site staff for details.