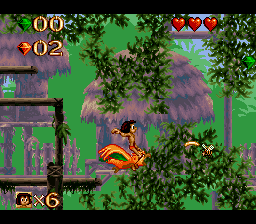 Watch Download (.smv)
Author notes Discuss
6.03 / 10 Votes: 7
Like the other video game adaptations of the 1967 Disney animated film The Jungle Book, the SNES version is a side-scrolling platformer starring Mowgli, the young boy raised by wolves in the jungle. Running, jumping, climbing, and swinging on vines, he must make his way through 11 levels. These include the jungle by day and by night, a village high in the trees, a waterfall, ape King Louie's realm and the fire-charred wasteland.
There are also runs published on the Genesis version and the NES version of this game.
Published on 11/22/2013 12:00 AM
See full publication history
Game:
Disney's The Jungle Book
Genres:
Platformer

Emulator Version:
Snes9x 1.51 v6
Webmasters, please don't link directly to the files. Link to this page or the front page instead.
Republication of movies from this site is only allowed under the following conditions:
Do not label them with speculations. If unsure, ask the site staff for details.