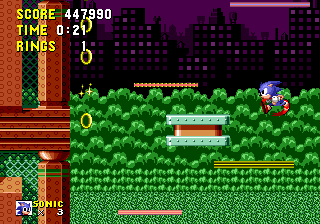 Watch
Sonic bounces around surprisingly fast. The lack of Spin Dash makes the strategy a bit different from that of Sonic the Hedgehog 2 and Sonic 3 & Knuckles runs, since preserving your momentum becomes a lot more important. However, this doesn't prevent the author from achieving crazy velocities even with such a significant limitation. In this run, the game is completed without collecting any emeralds.
This is the ninth publication of this branch, improving on the previous effort by 00:07.89 (of in-game time), due to even tighter optimization and some new shortcuts.
There are also runs where Knuckles and Tails they take advantage of their own abilities to finish the game in record time.
To see a movie of this game that doesn't take advantage of zips, watch the "no zips" run by Aglar.
We also have movies in Sonic the Hedgehog 2, Sonic the Hedgehog CD and Sonic 3 & Knuckles
The second encode link leads to a camhacked version. But don't expect the videos where Sonic is visible offscreen to make any more sense than the original ones!
This movie also has a full Atlas Map encode, which shows the camhack encode overlaid on a zoomed out map. 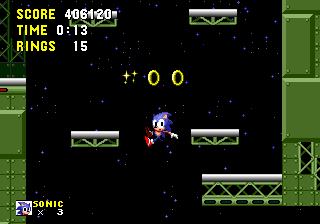 Watch
Fast bouncing around. This is a run of Sonic the Hedgehog which avoids zipping (gaining a large speed boost from being inside terrain), unlike the other run of this game. Therefore, most levels cannot be skipped, and instead have to be traversed using a more normal route, although the author still finds a couple of alternative methods to take shortcuts (it is hard to define hard rules to ban all glitches). In this run, the game is completed without collecting the Chaos Emeralds.
There are also runs where Knuckles and Tails they take advantage of their own abilities to finish the game in record time.
This movie has a full Atlas Map encode, which shows a camhack encode overlaid on a zoomed out map.
The baseline tab shows the default movie beating the game as fast as possible without any special conditions.