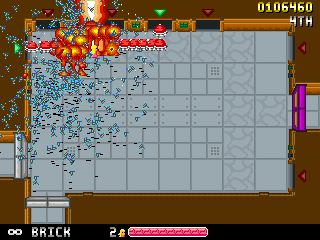 The good Mecha Santa plans to spread happiness and cheer all over the world. Princess Pitch, previously a sidekick in the game Garden Gnome Carnage, sets out to put an end to those silly plans.
This time around, Princess Pitch decides to take on Mecha Santa and his army of robot elves on a difficulty harder than the hardest (Reallyjoel's Mom), since it's too easy otherwise. Reallyjoel's Mom is a secret joke difficulty meant to be impossible: it multiplies the spawn and attack rate of all enemies several times over and removes all powerups and ammo refills. Consequently, a player without tool assistance will maybe beat one room - if they're lucky.
This TAS gets through with liberal use of the piledriver move, as well as precise movement and shooting.
Published on 2/6/2014 12:00 AM
See full publication history
Game:
Hyper Princess Pitch
Genres:
Action
Shooter

Emulator Replay:
Hourglass-r81
Download (.wtf)
Webmasters, please don't link directly to the files. Link to this page or the front page instead.
Republication of movies from this site is only allowed under the following conditions:
Do not label them with speculations. If unsure, ask the site staff for details.