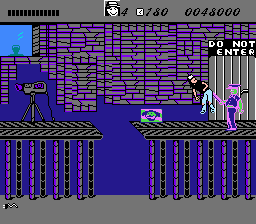 Watch Download (.bkm)
Author notes Discuss
4.68 / 10 Votes: 9
In this game loosely based on the movie of the same name, Wayne and Garth are trying to stop Benjamin Kane from buying out their show and taking Cassandra for himself. This excellent quest will take them through five areas full of living instruments, nasty ninjas and aggressive appliances trying to stop them.
In this run, Dooty utilizes Garth's laser gun and Wayne's spinning high jump in their respective levels to win in just under five and a half minutes. He also beats the previous run by 00:08.87 seconds through some new tricks and better application of the old ones.
Published on 4/5/2014
Obsoletes:
NES Wayne's World by Samsara in 05:38.86

Emulator Version:
BizHawk 1.6.1
Webmasters, please don't link directly to the files. Link to this page or the front page instead.
Republication of movies from this site is only allowed under the following conditions:
Do not label them with speculations. If unsure, ask the site staff for details.