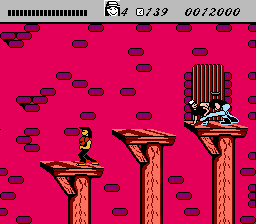 Watch Download (.fm2)
Author notes Discuss
4.22 / 10 Votes: 4
In this game loosely based on the movie of the same name, Wayne and Garth are trying to stop Benjamin Kane from buying out their show and taking Cassandra for himself. This excellent quest will take them through five areas full of living instruments, nasty ninjas and aggressive appliances trying to stop them.
In this run, Samsara plays through the game as fast as possible, utilizing Garth's laser gun and Wayne's spinning high jump in their respective levels to win in only five and a half minutes. In doing so, he beats the previous run by 00:17.70 seconds through a new route through one of the levels and some new tricks with Garth.
Published on 3/21/2014
Obsoletes:
NES Wayne's World by Cooljay in 05:56.56