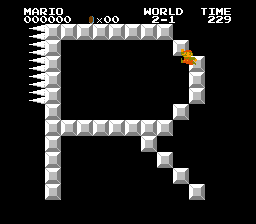 Watch Download (.fm2)
Author notes Discuss
8.12 / 10
Notable for once being one of the hardest Super Mario Bros. hacks ever made, Hard Relay Mario (2004) is more like a puzzle game with its cryptic and difficult level layouts.
In this run, made over the course of two and a half years, watch as HappyLee abuses the game engine to its fullest, finishing the game in the time it would normally take to get past the first few obstacles.
To see the game as it was meant to be played, you can also watch HappyLee beat the original game in his "warps" and "warpless" runs.
Watch this run being played back on a real console.
Published on 7/1/2014 12:00 AM
See full publication history
Game:
Hard Relay Mario
Genres:
Platformer
Puzzle
Unofficial game