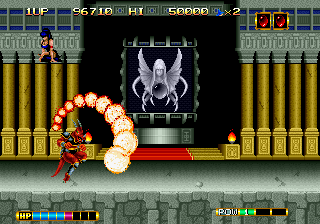 Published on 7/19/2014
Magician Lord puts you in control of Elta, a wizard who has the task of retrieving eight books of wisdom from the clutches of Az Atorse, the god of destruction. By collecting certain powerups along the way, you can transform into different characters, including Rajin, Samurai, Waterman, Shinobi, Poseidon, and Dragon Warrior. Each transformation makes Elta more powerful and grants him new attacks.
Watch £e Nécroyeur blaze through the game with heavy abuse of a zipping glitch and, well, blazes.
This run improves upon its previous iteration not by time improvement, but by deciding to end the game faster rather than ending input faster; this results in a slightly longer input time, but skips out a big waiting period from the previous run.
Obsoletes:
Arcade Magician Lord by £e Nécroyeur in 07:17.35

Emulator Replay:
FBA-rr 0.0.7
Download (.fbm)
Webmasters, please don't link directly to the files. Link to this page or the front page instead.
Republication of movies from this site is only allowed under the following conditions:
Do not label them with speculations. If unsure, ask the site staff for details.